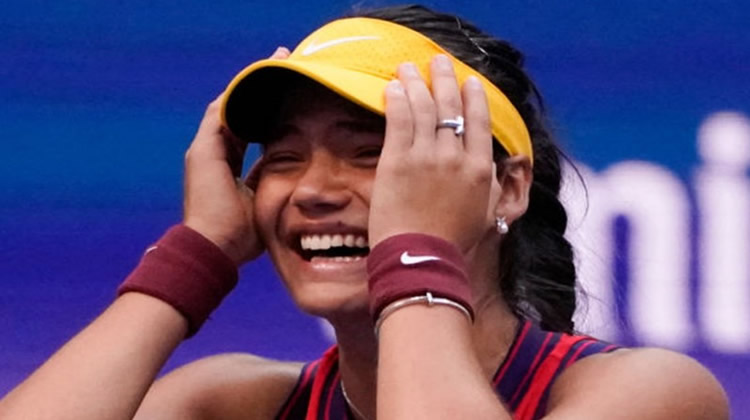 EMMA RADUCANU has won the US Open tennis tournament aged only 18, becoming the first British female tennis player to win a major title since Virginia Wade at Wimbledon in 1977

In front of 24,000 tennis fans in the Arthur Ashe Stadium, 18-year-old Raducanu made double history by being the first British female player since Virginia Wade at Wimbledon in 1977 to win a Grand Slam, as well as being the only qualifier to ever win a major tennis tournament, in either the men’s or women’s game.

Speaking just before walking out on the court, Raducanu said, “The time has flown here in New York. I’ve just been taking it one match at a time and it has got me to the final. I’m going to go out there and enjoy it today. It’s so exciting in my second grand slam to be in the final. I can’t really believe it but I can’t wait to get stuck in. I’m sure the crowd will be great so it will be a really positive experience”.

Picking up a winner’s cheque for £1.8 million (€2.1m), she moves from 150th up to 23rd in the women’s rankings, and won the tournament without losing a single set, although the first set was impossible to call as the two girls battled fearlessly, going from deuce back to advantage, and then back again to deuce, with some excellent rallies in between, ending the first set with a 6-4 scoreline.

Fernandez somehow seemed to lose her way in the second set, and the British girl capitalised on some erratic serving from the Canadian to pile on the pressure before ultimately taking the set 6-3, and the title of US Open champion.

With an all-star fan base in her corner, including the Duke and Duchess of Cambridge, and Boris Johnson, the UK Prime Minister, Emma Raducana has done Britain proud, and at only 18, who knows what else her career holds in store, as reported by dailymail.co.uk.