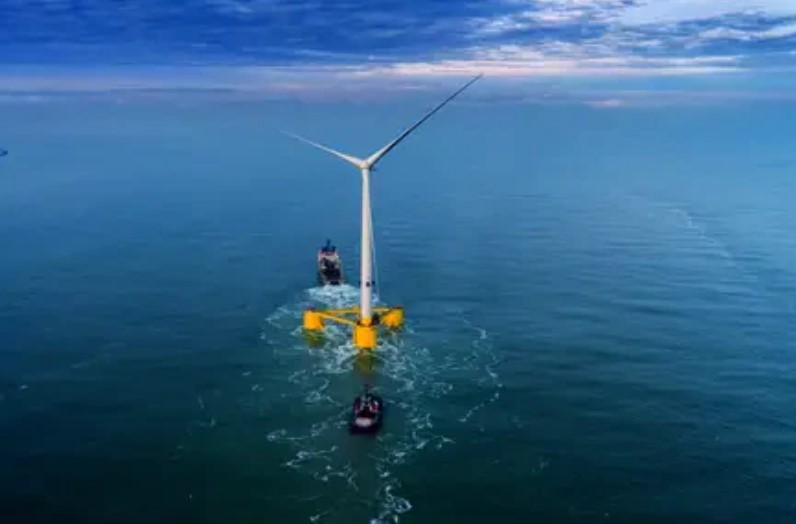 THE SPANISH company Navantia-Windar was involved in the creation of the world’s largest floating wind farm off the coast of Aberdeenshire in Scotland
The largest floating offshore wind farm in the world – the Kincardine project – has finally been created, off the coast of Aberdeenshire in Scotland, after Cobra Wind, a subsidiary of the ACS Group completed the installation of the final piece of this unique project.
Located approximately 15 kilometres off the south-east coast of Aberdeenshire, at varying water depths ranging from 60 to 80 metres, the Kincardine project is expected to generate up to 218GWh of clean electricity per year, an energy output that is estimated to be enough to power approximately 55,000 Scottish households.
Kincardine Offshore Wind has been in charge of developing this floating offshore wind farm, a wholly-owned subsidiary of Pilot Offshore Renewables (POR), while the engineering, design, supply, construction, and commissioning were the responsibility of Cobra Wind, with all construction carried out according to the standards of the ABS Class classification society.
The energy island consists of five floating turbines that were manufactured in Spain by the Navantia-Windar consortium, and later transported to Rotterdam in the Netherlands, where they were mounted on their foundations, after which they were towed by Dutch company Boskalis to the installation site, who then oversaw the process of hooking the turbines to their respective tie-downs and cables.
Matthew Tremblay, ABS Senior Vice President for Global Offshore, highlighted the potential of floating turbines, as he explained, “We are confident that they will have an increasingly prominent role to play in the development of sustainable energy around the world”, pointing out ABS’s role as a “world leader in classifying floating offshore wind”, stating that, “we can use this extensive experience to support the safe development of the floating offshore wind industry”, as reported by larazon.es.