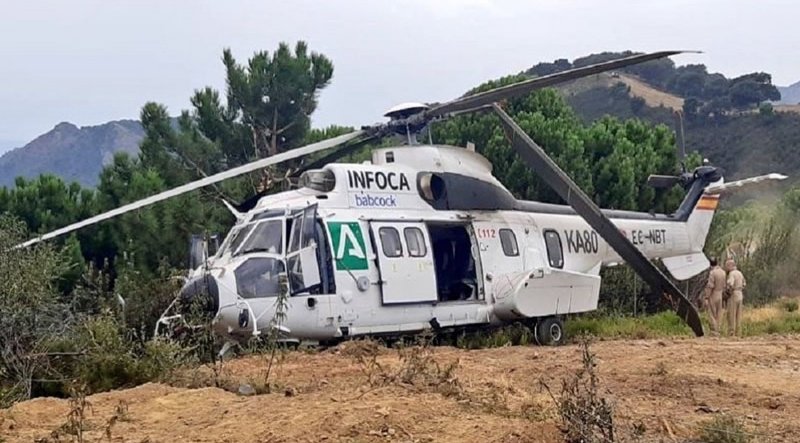 One of the Superpuma helicopters operating with the Infoca Plan while extinguishing the Sierra Bermeja fire has suffered an accident, but it is reported that the pilot, and all 19 of its occupants are unhurt.

It is reported that a cloud of dust that had been created by the work of heavy ground machinery caused low visibility for the pilot, which resulted in his colliding with a tree, and the Superpuma helicopter crashed to the ground.
Other news is that it has started to rain in the area, but as yet, not enough to extinguish the blaze, with 51 aerial means tackling this fire – now in its fifth day – from above, along with the continued ground forces and forest firefighters, with the director of Infoca is fully aware that the more firefighting means that are added to the operation then the more there is the likelihood of accidents happening, with them all contained in a relatively small area.
Juan Sanchez, director of the regional Operational Centre pointed out that despite the setback of the accident, all the autonomous communities and the State were working in an exemplary way and “we trust that it will not take long to be able to give better news. For now, the work continues”, adding, “We are facing the most complex fire known to the forest extinction services in recent times. We have been talking for a long time about the consequences of abandoning the environment or climate change. Today we are living them”.
He concluded, “We began to see a little light at the end of the tunnel, while we continue working intensely”, as reported by malagahoy.es.