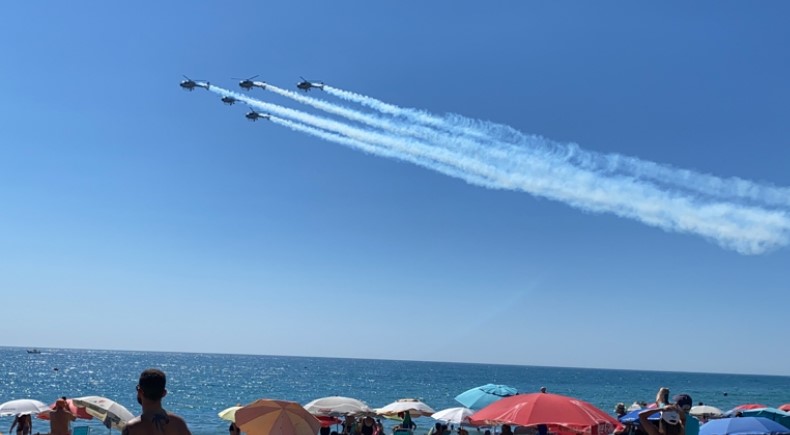 The Torre del Mar Air Show attracted a crowd of around 230,000 spectators for the fifth edition of this popular festival in the Axarquia region

The Torre del Mar Air Show and festival was back again this Sunday, September 12, for its fifth edition – having been cancelled in 2020 due to the pandemic – once again thrilling the eager public of this coastal town of the Axarquia with the appearance of 35 aircraft of different shapes and sizes, and types, including sporting, classic, and military aircraft.

As explained by Pablo Gonzalez, the director of the festival, the assembled crowd of an estimated 230,000 were there because they were interested in aeroplanes, and aerial acrobatics, adding that this year’s event marked a “return to normalcy without lowering our guard”.

Multitudes of visitors had started gathering from early in the morning, around 11.30am, where they were first treated to an exhibition of drones from the National Police Corps, with the added presence of one of their helicopters, which was given a rousing cheer by the crowd, as a ‘thank you’ for the force’s excellent work during the pandemic.

With the arrival of the Bucker aircraft, a biplane that had its first flight in 1934, belonging to the Aeroclub de la Axarquía, classical music filled the air, and its pilot, Cesar Canudas, must have been elated after failing to take off during the last edition, due to the conditions on that day, but on this sunny September afternoon, everything went according to plan for him as his plane took off perfectly into the sky.

This was followed by two extremely quiet and modest sports planes – the Garra patrol – that came from the Mar Menor club in Murcia, with Superdecathlon, from the Aeroclub de la Axarquia Bellanca, being the first of the day to perform aerial stunts and leave those present stunned, encouraging the audience to record their pirouettes through their mobile phones.

Camilo Benito, the Colombian who is the Spanish champion of acrobatic flight in the Advanced category, also gave an exhibition of acrobatics, a few kilometres from where he grew up in Marbella, while others such as Jorge Macias or Juan Velarde performed stunts such as doing ten 360-degree turns of their aircraft in just 10 seconds, as reported by laopiniondemalaga.es.