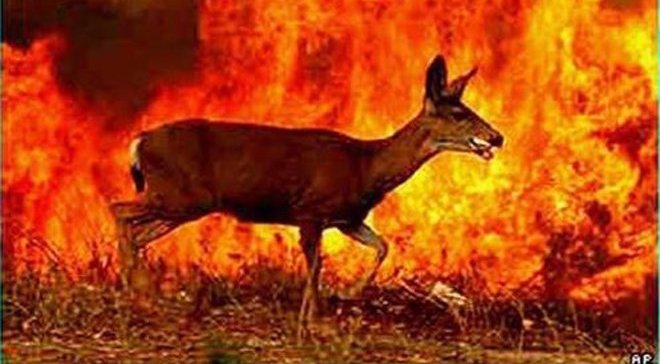 Sierra Bermeja fire claims the lives of thousands of wild animals.
Apart from the human life that was lost in the fire, together with hundreds of thousands- if not millions of euros- of property damage, it should be remembered that the blaze also had a devastating effect on the wildlife in the area.
Heartbreaking scenes were reportedly witnessed by brave firefighters, working in dangerous/life-threatening conditions, as scores of frightened harmless animals darted past them, running for survival- many sadly did not make it out to safety.

Sierra Bermeja covers a wide ​mountainous area, where cattle, goats and sheep and thousands of wild animals sadly lost their lives as the blaze raged on relentlessly.

Firefighters have been reporting the grim discovery of many creatures that have died in the flames. ‘The charred remains of animals are scattered across a wide area,’ explained forest firefighter, Francisco Morales.

The species that suffered the most, without a doubt, are the wild fauna – rabbits, deer, roe deer, wild boars – said the firefighter from Pujerra, one of the Malaga municipalities that was evacuated this Sunday because of the fire.

“You would get goosebumps when you heard the wild boars screaming among the blazing brambles in the mountains because they were burning,” says Francisco, visibly affected as he reflected on the terrifying sounds.

His neighbours describe Francisco as in love with the countryside and animals, who since the fire began on Wednesday has fought the devastating inferno that has put six towns in the Genal Valley region in danger.

It is very difficult to describe what it feels like to see how “the fire devours what you have been taking care of and watching every day for years,” this mountain firefighter said, with a broken and trembling voice.

Latest update:
The rain has been decisive in controlling the fire in Sierra Bermeja that last night was said to be at around eighty per cent stabilised. The gusts of wind in Casares prevented its control until at one o’clock in the morning when it began to rain.
Of the thousand people who have been available in the fire, two hundred troops remain in the area in two shifts. The zero level of emergency was declared this morning, the troops from other autonomous communities and the four battalions of the Military Emergency Unit were withdrawn, who were dismissed with applause by the residents of Estepona who have approached the advanced command post.

Adana Dog Refuge
One hundred dogs were rescued from a refuge just as the flames were coming dangerously close to their building as a wildfire raged out of control.
Volunteers drove to the Adana dog refuge in the hills near Estepona after 2,000 responded when local resident and British expat Susie Brown put out an emergency call.
“It just worked out perfectly – well, as well as these things can go when you have got burning flames all around you. When the fire was getting closer and closer, I put out a call on social media for fosterers to take the dogs. We have 100 dogs and puppies but 2,000 people came forward,” said Ms Brown, president of Adana, who is originally from Newcastle.