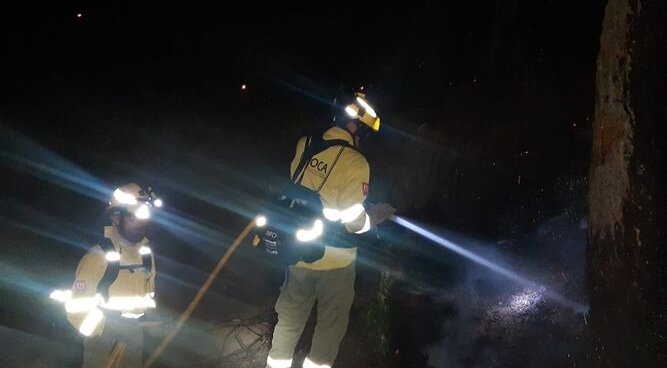 At last good news from the fire that has devoured most of Sierra Bermeja. For all intents and purposes, notwithstanding some small breakouts still burning slowly, the fire could be considered as out.

The operational direction of the extinction tasks announced at 7:06 this morning, that the fire is considered controlled after a night in which the rain has been a great ally.

The president of the Junta de Andalucía, Juanma Moreno, has said that the Andalucian Government has activated level 0 of the emergency plan.

According to the latest estimates of the Infoca Plan, there were 9,963 hectares destroyed by the flames, spanning an area of 83 kilometres.

At the end of last night, Monday, September 13, the deputy director of the Regional Operational Center (COR) of Infoca, Alejandro García, warned again that it is an “unprecedented, complicated and difficult” fire, where he described that more than 1,000 troops [sic], “heroes”, work “without truce”.

The Minister of Agriculture, Carmen Crespo, reported that the residents of Jubrique, Faraján, Júzcar, Alpandeire and Pujerra will be able to return to their homes (but not those of Genalguacil), and said that “there is a large part of this fire that is in good condition” but “as long as we do not have it complete, we will continue”- referring to the fact that the blaze continues but due to efforts of the hundreds of firefighters and the help of the military is slowly becoming manageable.

The deputy director of the COR of Infoca has said that with the established perimeter, it is not possible to talk about the situation of the fire, but instead about sectors and flanks.

The southern zone, he said, “We could consider it stabilized, the rest of the sectors are alive, some very alive.”

Specifically, the western area, reactivated on Monday, among other things, triggered by the easterly winds. It generated a “very strong” reignition of the flames, he said.

On Monday night, work was specifically concentrated in the fire in that area, which is the one that “would threaten the Casares area. There is a threat but it is not imminent,” he added.

The rain started this morning across the area where the fire is concentrated, bringing some relief. Heavy showers, and even thunderstorms, are forecast for most of Andalucia, which will hopefully help extinguish the remaining flames.