The DGT warns of more fake email scams on drivers 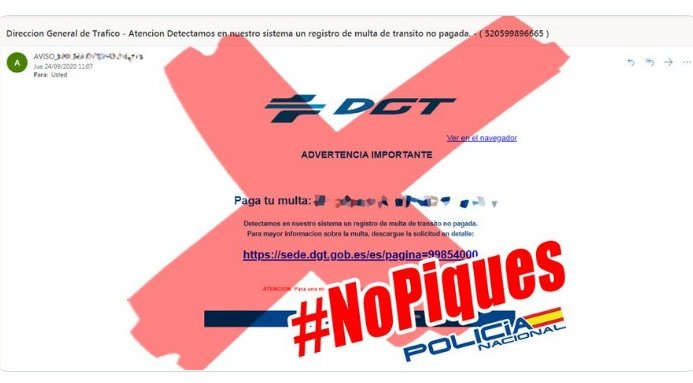 THE DGT has once again warned drivers of the circulation of emails pretending to be from them, but which are scams

The General Directorate of Traffic (DGT) has again urged the public to be aware of online scams, as more and more cybercriminals take the initiative to steal your personal and financial data, while pretending to be them.

One of the oldest scams is the one which consists of the ‘DGT’ notifying you, usually by email, that you have an “unpaid traffic fine”, but they tell you quite kindly that you can pay the penalty there and then, by clicking on the link they have provided, which of course, once clicked, could lead you to a phishing-type scam to fool you into giving your personal info, or, it could install malware in your device.

As explained by the National Police in the Twitter post below, quite clearly, the message you received is a scam, delete it!

In addition to the fake traffic fines, cybercriminals are also attacking users through another avenue: their driving license. Again posing as the DGT they send them an email and inform you that your permit has expired, and then they tell you all the instructions you have to follow to avoid any problems, which could go something like:

“Dear ****, your driving license requires identification after it expired in our system. You need to respond to this email with the following information: front and reverse photograph of your National Identity Document (DNI / NIE), front and reverse photograph of your Driving License (original), and a current photograph of yourself”, probably concluding with something along the lines of:  “It is important that it be done as soon as possible upon receipt of this automated email, to avoid future inconveniences. Thank you very much for your help”.

If the entire procedure is followed, the user will end up on a fake web page where a file infected with malware will be automatically downloaded and installed on your device, which then allows cybercriminals to access your passwords and bank details.

The DGT is clear in this regard: “Do not provide any information, or click on any link. Delete them directly”, something that the National Cybersecurity Institute (Incibe) also recommends.