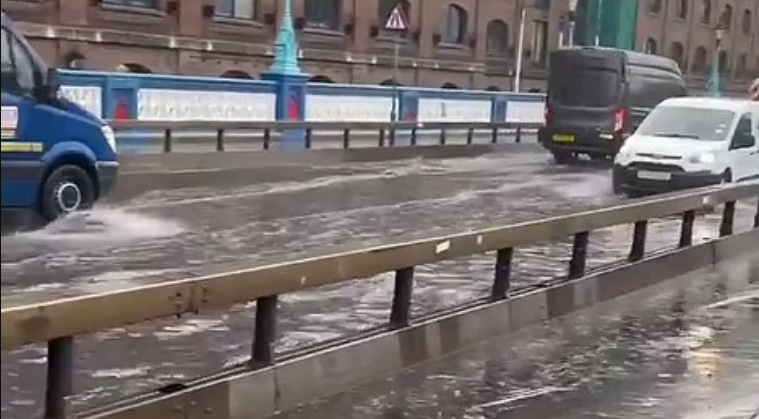 Heavy downpours have left Tower Bridge in London underwater as London was hit with flash flooding this morning, September 14, causing travel chaos across the city.

Commuters had delays to their journeys as major roads such as North Circular and the District Line on the London Underground also suffered torrential rain.

Not 100% sure how a *bridge* floods, but this was Tower Bridge just now. pic.twitter.com/YCUOBcPD18

The Met Office has issued a yellow weather warning for the majority of England and said the heavy rainfall may cause disruption across England through the day. It also warns that homes and businesses could suffer flooding which will cause damage to some buildings.

A spokesperson for the forecasting service said: “An area of rain is expected to move northeastwards across much of England on Tuesday, with thunder in a few places. 15-25 mm of rain is likely quite widely with up to 40 mm in a few places, leading to some flooding and disruption.

“However, there is a small chance that this rain will be especially intense in a few places with 50-70 mm possible, and more significant disruption where this occurs.”

Meanwhile, in Andalucia, Aemet yesterday, September 13, warned of an Atlantic storm that headed towards the Spanish mainland which will lead to abundant rainfall, accompanied by storms, combined with a noticeable drop in temperatures today, September 14.

The State Meteorological Agency‘s report says that the storms are more likely to occur in the western third and in the northeast of the region, and could be locally strong in the mountainous areas, especially in the Central part of the province and in the Pyrenees.