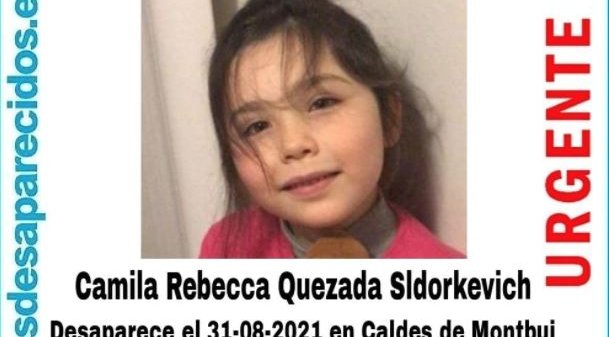 Missing 6-year-old from Spain’s Barcelona has allegedly been taken abroad by her mother.

The Guardia Civil have taken social media to request help locating a six-year-old girl who has been missing for around two weeks from Barcelona.

Camila Rebecca is 1.16 metres tall, has brown eyes and has long, dark, straight hair. The young girl is said to weigh around 24 kilos.

Anyone who has information on the girl has been requested to contact either the Guardia Civil (062), Emergencies (112) or the National Police (091).

Julio Humberto, Camila Rebecca’s father though claims that she could be in Russia with his ex-wife. According to the father the pair had been having custody issues since their divorce.

Speaking to el cierredigital the father said: “My ex-wife spoke on a Russian channel and explained that she was not afraid to go back to Russia, that she had a job there, that she was fluent in the language and that her daughter could adapt well to the country. I took this to court and asked for the borders to be closed to my daughter, as we also knew that the Russian consulate in Barcelona had given my daughter a passport without my consent, but the judge refused me because according to him it was a very drastic measure”.

“When the restraining order ended on 31 August, I tried to contact all the protection services so that we could try to coordinate a way to see my daughter again, and when we tried to contact my ex-wife she was missing and we were forced to file a child abduction report. We now have no knowledge of where the child is, but we believe we are fairly certain of her whereabouts.”