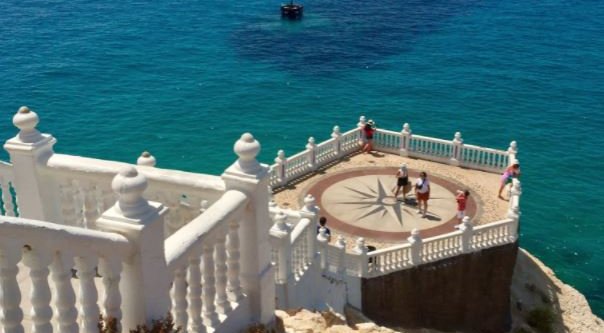 A young woman has been left fighting for her life after falling from an iconic Benidorm tourist spot, while she was taking a selfie.
The 26-year-old Ukrainian woman has been left in a critical condition after she fell from the Castle Viewpoint also known as ‘The Balcony of the Mediterranean’.
According to health authorities talking to Efe, the young woman was taking a selfie when she fell. She is now in a very serious condition.
The woman was rescued and evacuated after suffering from various traumas and symptoms of drowning to the General Hospital in Alicante.
The shocking events happened on Tuesday shortly after 6 PM. The woman had been with a friend at the viewpoint which is one of most visited and photographed points in the Valencia community. The woman had been taking a selfie on a railing and was trying to get the beach in the background when she sadly fell.
The accident saw her fall around 20 metres down the cliff into the sea. Fortunately, lifeguards were able to rescue her and manoeuvre her to some nearby rocks. The lifeguards then performed resuscitation manoeuvres. The unconscious young woman was then taken to the port.
Once emergency services arrived further resuscitation manoeuvres were carried out and her vital signs were recovered, before she was transferred to hospital.
In other Spanish news, Santander opens ten-million-euro line of credit for those hit by the devastating Sierra Bermeja fire. The bank aims to help farmers hit by the fire get up and running again as soon as possible.
Santander have opened a line of credit worth 10 million euros which will offer “very favourable” conditions to people affected by the Sierra Bermeja fire that hit multiple municipalities in Malaga.
The fire has been considered under control since Tuesday, September 14, although work is still ongoing to extinguish it fully. The fire saw thousands of people evacuated and a devastating amount of land burned.