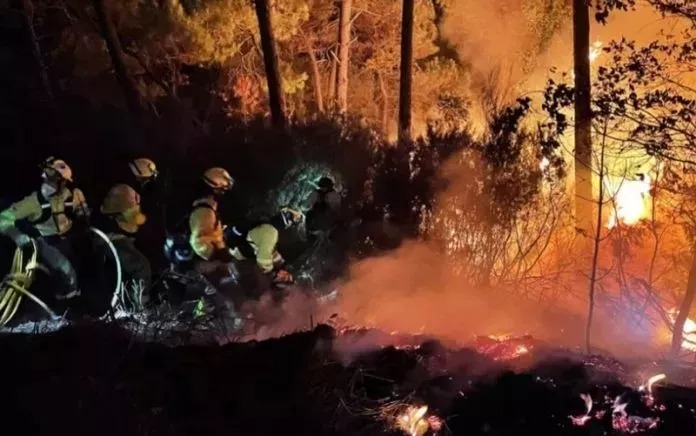 Fire threatens survival of 14 species that are only found in Sierra Bermeja Credit: Infoca

Fire threatens survival of 14 species that are only found in the Sierra Bermeja in Spain.
The Sierra Bermeja fire has already been brought under control, but it has left devastation in its wake. Flora and fauna over an area of 9,670 hectares has been hit hard, and the fire has left the survival of fourteen species “threatened”.
The fire which broke out proved to be extremely difficult to bring under control and raged for days in an active status. The area is said to be home to around 1,000 species.
Felipe Roman-Requena, a graduate in Biology from the University of Granada is an expert in Sierra Bermeja’s fauna. Speaking to 20 minutes he explained that: “there are fourteen species that are exclusive” to Sierra Bermeja. These “are threatened and have possibly been significantly affected”.
“Of course they are in danger of extinction because they are subject to an event like this.
“Most of the endangered species are invertebrates, but there are also vertebrate endangered species because they have a reduced distribution and live in other places.”
The area has extensive fauna and the expert explained that “of the 1,000 species found in Sierra Bermeja, only 14 are threatened”.
Sadly, the status of these species cannot be known at this moment. “Nobody can know if they have become extinct because nobody has any real information on the current status of these species” said the expert.
He added that: “these species have been resisting fire for millions of years and have probably not become extinct”.
In other Sierra Bermeja news, National Park Platform calls for Sierra Bermeja to be made a National Park to help prevent fires in the future.
Sierra Bermeja has recently been hit by devastating fires. The National Park Platform have called on political authorities to declare Sierra Bermeja a National Park. This distinction has already been given to the neighboring mountain Sierra de Las Nieves. The platform believes that by making Sierra Bermeja a National Park it would help reduce risk of fires in the future.
They believe that making the Sierra a National Park “will mean more vigilance, more control, more resources for prevention and faster decision-making”.