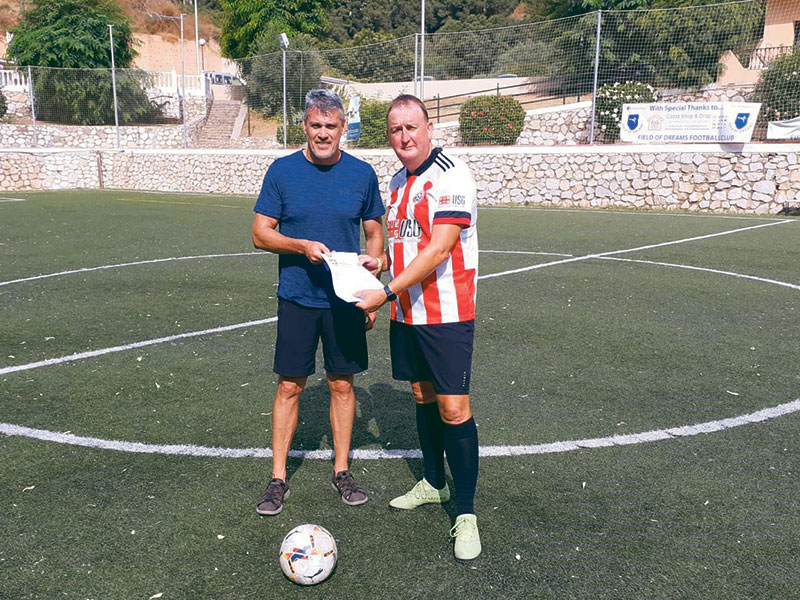 AT tonight’s Walking Football League match between the Walking Dead and Malaga A and B teams at the Finca Naundrup, at 6.30pm the home side have arranged a collection for the firefighters and people displaced by the recent fires which will  go to a local charity Collective Calling for distribution. Food, water, blankets and clothing are the items most needed.

They can be dropped off tonight at the Finca during the football or at the walking football sessions of Malaga WFC (Monday nights 6.30pm to 8pm), WFS Calahonda (Monday and Friday 10am to 11am) and the Walking Dead (Wednesday 6.30 to 7.30pm).

All the League clubs are  playing their part in the community by giving their full support to this appeal.

‘Exclusive and expensive, Benahavis. But also cheap?  One of the most exclusive and expensive areas in Spain has been branded ‘cheap’  by the local Walking Football Club and other users of the local seven-a- side council football pitch at Benahavis. The playing surface is so bad the HIDROMASTER Walking Football League have told the two local clubs, Atletico and Sporting Benahavis that they cannot play their home games on this ground due to its bad condition and that they will have to look for another venue.

Three League managers stated that the pitch was “dangerous’ and their teams would not play on it.

This is a huge problem for the clubs with Atletico due to host the Walking Dead on Tuesday September 28.

An enquiry by the Walking Football club’s Manager Tony Cifaldi as to the possibility of the pitch being resurfaced was met with “It is part of a refurbishment which will  not be completed until the end of the year.” A request to use the grass pitch meantime was met with a refusal.

The club have approached Marbella Council requesting permission to use the excellent San Pedro facility, although this may mean having to change the name to WFS Marbella.

It is hoped a decision will be made before Benahavis/Marbella’s first home League games against the Walking Dead A and B teams on September 28.

‘New signing.’ Recent WFS Calahonda signing Tomas Garcia Otero was welcomed by club manager Lesh Brzuzy. Lesh lamented that Tomas, like many of the squad, was unavailable for tonight’s HIDROMASTER Walking Football League match away to Aston Viñuela ‘A’.

Calahonda, with far fewer members than the illustrious other teams in the Leagues, will have to rely on the ‘old guard’ to get the team off to  a good start. Lesh commented that “the aged warriors will give off their best regardless.”

Results of this week’s matches and future fixtures in next week’s EWN. As always make sure you collect your copy of the Euro Weekly News… Supporting Walking Football.