Sierra Bermeja to be declared a disaster zone 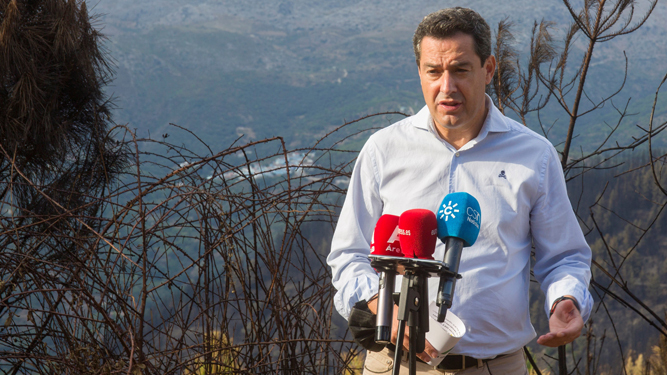 Sierra Bermeja to be declared a disaster zone

Sierra Bermeja in Estepona is to be declared a disaster zone after the blaze destroyed hundreds of acres of land.
The president of the Junta de Andalucía, Juanma Moreno, has announced that the regional government is going to ask the Council of Ministers for Sierra Bermeja to be declared a catastrophic disaster zone. The President also said he will also ask that a Posthumous Civil Merit Ward be awarded in memory of the firefighter who died while extinguishing the fire.
Moreno, who recently visited one of the areas affected by the fire – which burned 9,640 hectares – said that this event was a “catastrophe in environmental, social and economic terms” so it must be resolved as soon as possible.
The Andalucian president also announced that the local government will immediately approve an aid package, which the Junta de Andalucía is already working on, and has reiterated that they need support from all the institutions in the region, the country and Europe.
“We are going to try to take advantage of all kinds of aid, national and European, to help all those who have been seriously affected,” said Moreno, who stresses that they are working on an emergency works plan for the affected area.
The president also announced that he is going to ask the popular parliamentary group to ask the Congress of Deputies to start a process to request reform of the Penal Code so that the penalties for all those who “set fire to our forests are much more severe and harsh than they have been until now.”
Moreno encouraged Andalucians to visit and enjoy the area “despite how much it has been destroyed”, so that “we all become aware of what happens when we throw away a cigarette butt or a bottle and see that the damage is irreparable”.
Moreno said that “all indications” suggest the fire was caused intentionally, although he did not want to give more details about the investigation, presently being carried out by the Guardia Civil.