Over 25,000 University students from Madrid gather in the city for a ‘botellón’ 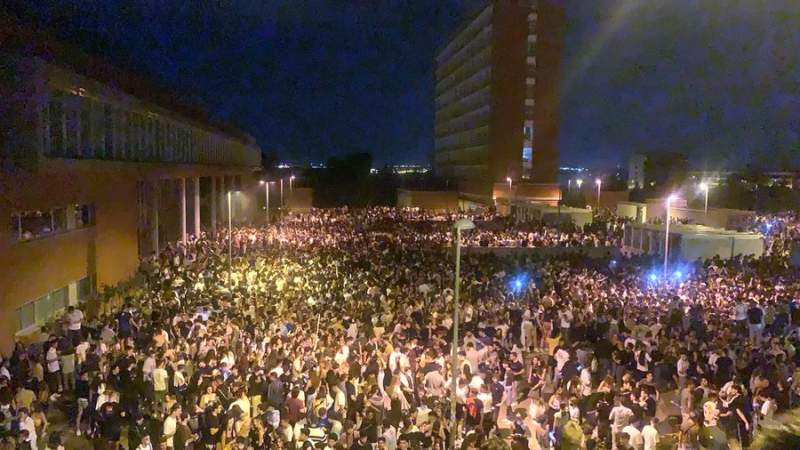 Over 25,000 University students from Madrid gather in the city for a 'botellón'. image: Twitter

Over 25,000 University students from Madrid gathered in the city last night for a ‘botellón’.

Around 25,000 young people filled the University City of Madrid on Friday, September 17, night to celebrate the start of the academic year with a *botellón. The police said that without a prepared plan of operation, dissolving the crowd would have been “an almost impossible task.”

Instead, officers limited themselves to checking that there were no incidents and guarded the entrances and exits to the subway. Images of the night party soon flooded social media networks, attracting a few thousand more who were alerted to the event.

Subway platforms were also full of young people- none sticking to any safety distance.

The lampposts that were in the center of the square, in front of the Faculty of Philology, in addition to lighting also served as cucañas, (grease poles) in such a way that, when someone managed to climb them, everyone applauded the feat.

Although there were no major incidents, the police never entered the premises. In fact, only an ambulance entered to treat an alcoholic coma in front of the Law School, but the level of crowds was such that it took the vehicle 10 minutes to advance just over 20 meters to reach the student.

The revellers began to arrive at the facilities around eleven o’clock at night, the last ones left the campus at seven in the morning. The police assure that their presence was a deterrent for many of them to leave, but that “the absence of a means of transportation at that time made it go very slowly.”

*Botellón is a Spanish activity when people congregate in public areas to socialize while drinking alcohol. The activity is popular among teenagers and young adults partly in response to rising drink prices at bars or clubs, and partly because more people can meet in one place.