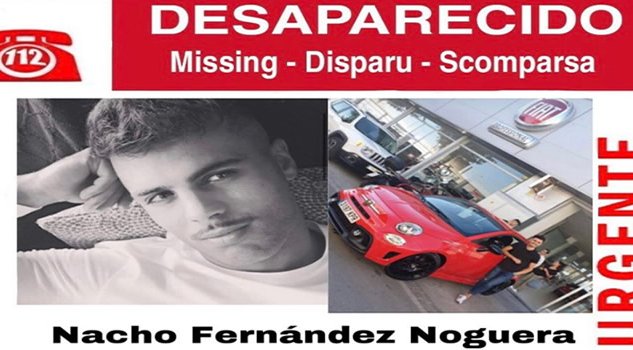 THE SEARCH continues for Ignacio Fernandez Noguera, a 23-year-old man missing from Alhendin in the province of Granada

A police search operation by the Guardia Civil and the Judicial Police is continuing, 25 days after Ignacio Fernandez Noguera first went missing on August 24, with his relatives reporting that there has been no news of him since that date.

Nacho is a 23-year-old young man, who is 1.70 metres in height, and as the police search has drawn a blank so far, his family has approached the press, specifically Europe Press, asking to circulate information about him, with Nacho’s mother telling the media, “I cannot contribute anything. Do not leave it. We continue in his search”.

The missing man was last seen when he left home on August 24, driving his red Fiat Abarth, with the number plate 3197 KPR, and wearing a plain white T-shirt, grey jogging bottoms, and white Adidas sneakers.

It is known that he was seen refuelling his car at around 9pm on that same Friday evening, at a petrol station in Padul, a town near to his home, and that at around 1.30am on Sunday, August 25, Nacho is thought to have met a friend at the door of the popular Mae West nightclub in Granada city, although the Guardia Civil search continues, they have been able to clarify this fully, as the images obtained from security cameras are not clear enough, but, if this was the case, then it is the last-known whereabouts of this young man.

His family has also posted Nacho’s photo on social networks, in the hope that somebody might have information about him, and in addition to the normal emergency services numbers, they have given two other numbers to contact: 642 650 775 and 649 952 957, along with the email address [email protected], which is for the missing persons association, as reported by granadadigital.es.