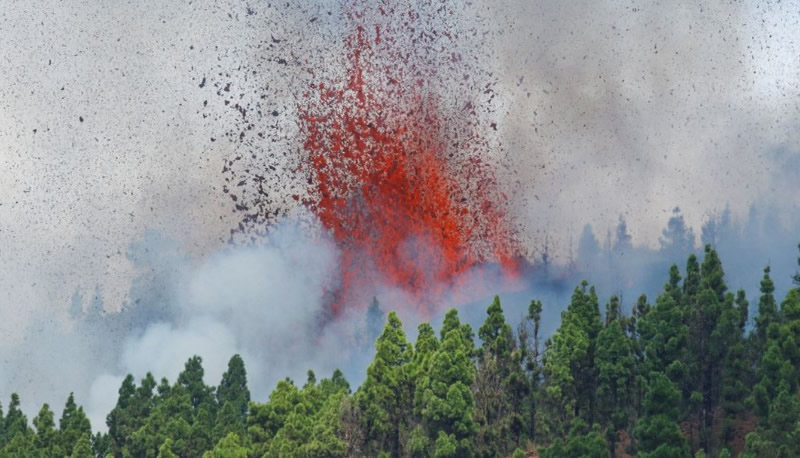 Experts had warned over the last few days, after thousands of earthquakes had been registered, that it was imminent the Cumbre Vieja de La Palma volcano, in the Las Manchas area of the Canary island of La Palma, would erupt, and today, Sunday, September 19, after an earthquake that registered 3.8 on the Richter Scale, it has finally happened, at around 3 pm local Canaries time, with lava flowing out from open fissures.

Apparently, there were four eruptive mouths through which the lava is coming out, with enough force for more than one now, but right now a fifth has exploded, with David Calvo, a geologist at the Volcanological Institute of the Canary Islands (Involcan), explaining to Television Canaria that today’s activity is what is known as a ‘strombolian eruption’, a phase in which lava flows and pyroclasts are emitted, reminiscent of the images that were seen in the eruption of Teneguia, 50 years ago.

Calvo added that for now, they must continue working on the ground to try and make a quick estimate to the amount of lava that is being released, in order to provide all kinds of data to the authorities to manage the situation, pointing out that this eruption is not a lot different to other ones they have previously worked on around the world, and they must wait and see how the eruptions develop, commenting that it has not been a very explosive eruption thankfully, with the lava coming out easily.

He also acknowledged that it is “totally unpredictable” to know how long this eruption will continue, until they have conducted their preliminary investigations are concluded to determine the energies that have been released through the fissures, and stressed that it is common in volcanism in the Canaries for several eruptive mouths to open up at the same time, as has been the case in the past, and that now they must wait and see if the eruption concentrates on just one mouth, or if more will appear.

This volcano is one of the most active volcano complexes in the archipelago, and has been responsible for two of the last three eruptions that occurred there, in San Juan in 1949, and Teneguia in 1971.

Sources from Aena have reported that as a preventative measure, the manager of the Spanish air navigation company, Enaire, has issued the recommendation that no flights should depart the island until further notice.

🔥mantle of lava running from the volcano of La Palma in our Canary archipelago 🔥 pic.twitter.com/BkAFuQSkwU