Man City held at home by Southampton in goalless draw 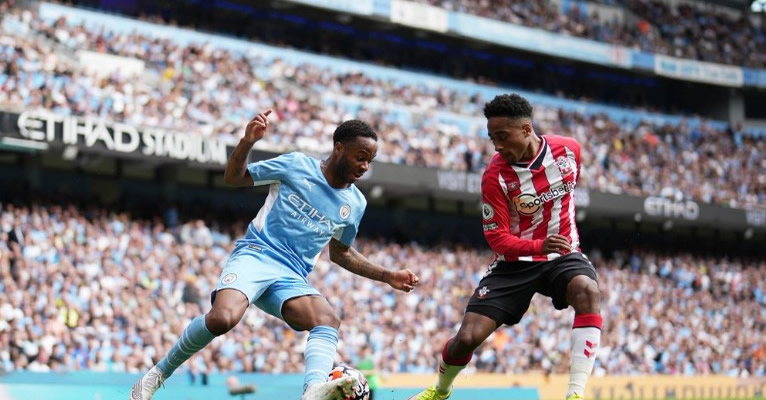 Man City somehow reverted to a side unable to fire a shot on goal today, Saturday, September 18, as their match at the Etihad stadium in Manchester, in front of 53,500 fans finished in a very fortunate goalless draw against Southampton, with the bizarre statistic that their first shot on goal was not until the 90th minute, and the side lacked the usual precision passing and control of possession.

Pep Guardiola’s men were, in fact, lucky to even salvage a point, as Ralph Hasenhuttl’s side deserved to win the contest, and actually thought they had the opportunity to take the lead on the hour when a bizarre few minutes saw referee Jon Moss blew for a penalty after Adam Armstrong was bundled over by Kyle Walker, who was in turn shown a red card, only for VAR to overturn both his decisions.

A very dour performance only sparked to life in the 90th minute when a header from Phil Foden was saved, only to bounce to Raheen Sterling who slotted the ball into the Southampton net, only for the linesman to flag him offside, again going to VAR but this time agreeing with the official’s decision to keep the scoreline 0-0.

This result leaves City three points behind leaders Liverpool, who won 3-0 against Crystal Palace, with goals from Sadio Mane, Mo Salah, and Naby Keita, while Southampton are still without a win, drawing four of their five games so far this season.

There had been some worry before the match that Guardiola’s midweek comments about City’s fans not getting behind their team enough could create a rift between him and the supporters, but they were very enthusiastic throughout the match, though to be honest, they had very little to cheer about.