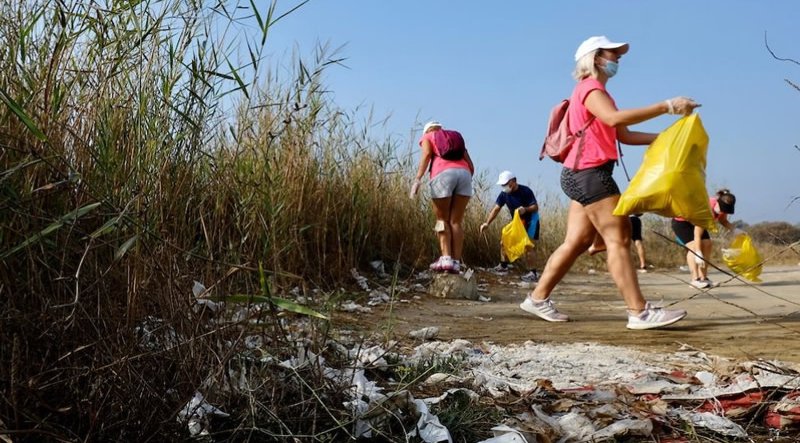 The Green Run took place on Saturday, September 18, an initiative organised by La Opinion de Malaga, and Prensa Iberica, during which 300 participants gathered at 10am in the esplanade next to the beach of San Julian in Guadalmar, and arranged themselves into teams of ten, with a monitor for each team, with the objective of collecting as much rubbish from the beach as possible.
For the next 90 minutes, these teams set about collecting items such as cigarette ends, plastic bottles and containers, discarded clothing, and other objects, and as one of them, called Luis, commented, “We have found many things that have surprised us. An armchair, a scooter, a barbecue, and even some skis. I don’t understand why people throw these things on the beach”.
In total, the ten teams’ combined effort returned an incredible 746kg of waste, with Teresa Porras, the councillor for beaches from Malaga City Council explaining, “One of the things that I tell the citizens is that we all have to collaborate with the cleaning activity, otherwise it is very difficult to maintain a clean city”.
She continued, “We must be aware of the damage we can do by leaving a cigarette butt on the beach, or throwing oil down the sink, everything ends up in the sea. I only ask that the people of Malaga be clean for their city, that they never do in public spaces what they would not do at home”.
After all the bags were weighed, team No6, with 114kg, was proclaimed the winner who had collected the most rubbish, which earned the ten team members one night in a double room at the La Garganta Rural Tourist Hotel, as well as an annual subscription award to the application Officer Komoot.
This Green Run was sponsored by Malaga City Council, OPPLUS, and Holiday World, with the collaboration of Coca-Cola, Decathlon Malaga, Hotel La Garganta, Komoot, and Hospital Santa Elena.