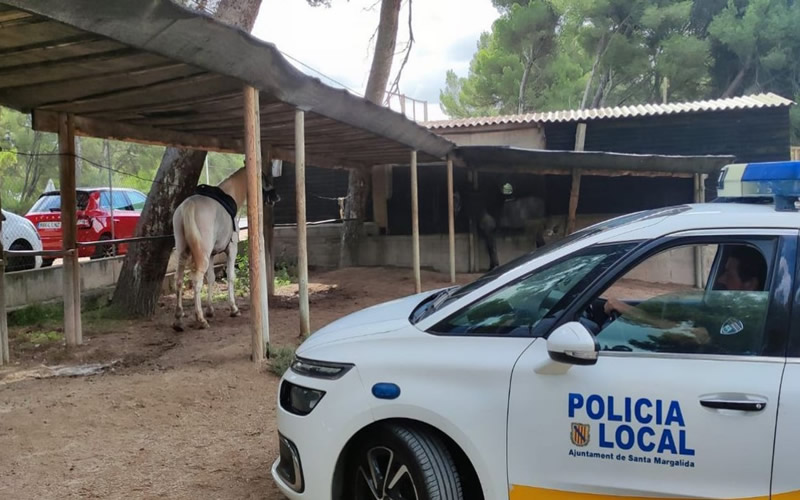 Police in Mallorca detain a man for trying to run people over on his horse. image: policia santa margalida

A man has been detained by the police on the Balearic island of Mallorca after he rode his horse at a gallop along a busy pedestrian walkway in the municipality of Can Picafort, almost knocking several people over.

According to a police statement, 112 emergency services reported that the incident occurred at around 10pm on Friday, September 17, with the service receiving several calls informing them of an individual mistreating a horse near to Can Picafort beach.
A police patrol was mobilised to the location, who verified that there was a man recklessly riding a horse on the Paseo Ingeniero Antonio Garau, where he was seen trying to run over several people who were walking along this section of the street, galloping the horse and then suddenly stopping abruptly.

They managed to intercept the individual and he was identified as a 47-year-old man of Spanish nationality, residing in the Can Picafort area, and their first impression was that the man was under the influence of some sort of narcotic substance, appearing very upset while also behaving in a very uncooperative manner.

When asked by the police why he was trotting his horse down a crowded pedestrian promenade he reportedly told them that he was “going to buy tobacco”, while denying that he had mistreated the animal, even asking the police if they had observed blood or injuries on the horse.

While the police were identifying the rider,  several people approached them, both residents and tourists, to explain that the individual had been observed riding the horse on the beach, and that he was galloping, and then attempting to jump over a small stream that empties into the sea, allegedly pointing out that each time the animal fell, when it got up from the ground, the rider punched the horse, hitting him in the eyes and on the head, while also kicking him in the legs, and not just once, but several times.

The Santa Margalida police patrol, after confiscating the animal, in order to protect it, transferred it to a ranch in the Can Picafort area, where it will be guarded until the judge decides its future, as reported by laopiniondemalaga.es.