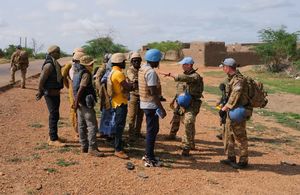 British troops in Mali have helped investigate a gruesome massacre after dozens of gunmen attacked villages.

Scores of gunmen attacked a number of villages on August 8 around Outtagouna, close to the Niger and Burkina Faso borders in the south-east of the country, leaving dozens of people dead. Armed groups aligned to Daesh and al-Qaeda are known to operate in the region.

In the hours after the killings, reports of the massacre started to reach the British contingent to the UN mission in Mali (MINUSMA) at their base in Gao, 150 kilometres to the north.

MINUSMA’s Force Commander Lt Gen Dennis Gyllensporre tasked the troops to bring forward planned operations and launch immediately to the area in their specially designed off-road desert vehicles, with the 250-strong UK Task Group arriving at the scene less than 36 hours after the attacks.

The troops immediately secured the villages, providing protection from further attack and allowing a special UN Human Rights team to interview locals and collect physical evidence left by the attackers. Due to their rapid arrival, the LRRG were able to provide critical information to support the UN investigation, which will aim to help bring the perpetrators to justice. The UK personnel were also able to use their human security training to engage with all sections of the local population to understand the situation and provide reassurance, with female peacekeepers engaging with local women.

Armed Forces Minister James Heappey said, “The loss of so many innocent lives is a terrible tragedy. This horrific event is a sad reminder of why UK troops are deployed to this difficult and dangerous UN peacekeeping mission.

“The UK Task Force’s swift reaction assisted the UN Human Rights Officers to collect vital information about the massacre that might one day see violent extremists held accountable for their crimes, while also providing a measure of security to these traumatised communities in the wake of this disaster,” he added on September 20.