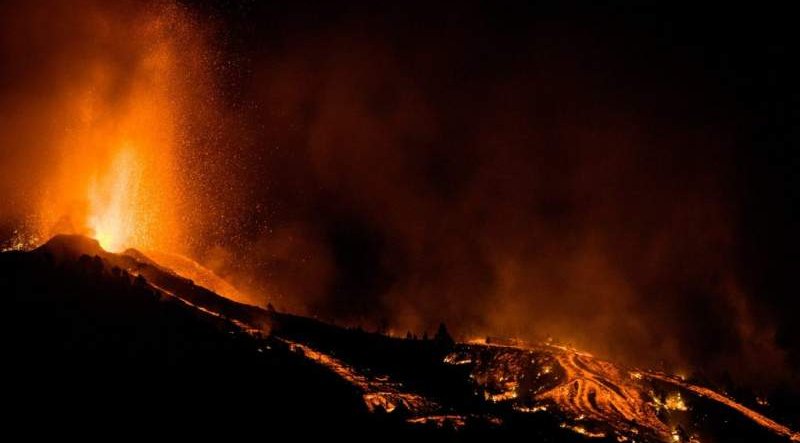 BRITS are facing apocalyptic scenes after the eruption of a volcano on the Spanish island of La Palma sent 1,000C lava streaming towards towns forcing over 500 tourists to flee.

Huge red plumes topped with black and white smoke shot out of the La Cumbre Vieja volcano on Sunday, September 19, afternoon as a river of scorching lava flowed down the mountain and swallowed 20 houses in the village of El Paso.

The authorities had estimated that as many as 10,000 people might have needed to be evacuated from their homes, and recommended to residents that they close all windows and exterior doors, close window blinds and turn off their supplies of water, gas and electricity before making their way to the established meeting points.

There have been no reported victims or injuries so far, but by Monday morning, September 20, the local authorities were estimating that the lava had razed around a hundred homes to the ground in El Paso.

The volcano that erupted on the Canary Island of La Palma, prompted authorities to speed up evacuations of more than 1,000 people as lava flows destroyed isolated homes and threatened to reach the coast.

A huge plume of black and white smoke rose after the eruption at 3:15 p.m. local time on Sunday, September 19,  in Cumbre Vieja National Park, the Canary Islands government said.

🔥mantle of lava running from the volcano of La Palma in our Canary archipelago 🔥 pic.twitter.com/BkAFuQSkwU

Huge red plumes topped with black and white smoke erupted along the volcanic ridge of Cumbre Vieja, which scientists had been watching closely following the buildup of molten lava below the surface and days of small tremors. earthen. Authorities immediately evacuated more than 1,000 people, but the Spanish Civil Guard said it may have to evacuate up to 10,000 residents.

La Palma, with a population of 85,000, is one of eight volcanic islands in the Spanish Canary Islands archipelago, off the west coast of Africa. At their closest point, the islands are 60 miles from Morocco.