Faroe Islands tradition leads to slaughter of 1,429 dolphins in one night 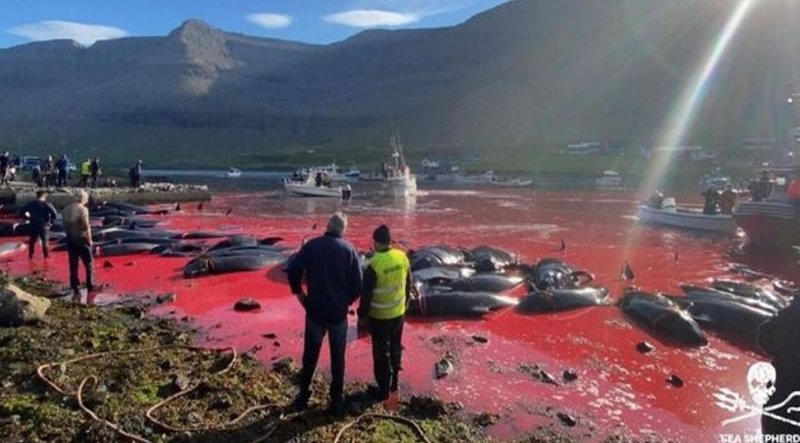 A FAROE ISLANDS annual tradition has led to the slaughter this year of 1,429 dolphins in one single night

There is a bloody tradition that takes place in mid-September every year in the remote Faroe Islands, located in the North Atlantic – but under the administration of Denmark – which involves the slaughter of cetaceans, specifically dolphins and pilot whales, which is known locally as ‘grind’, with the objective being to kill enough of these creatures to guarantee the food supply for winter in the community.

This year’s mass slaughter has brought the focus of the world’s media upon it, due to the shocking images that have been circulating online, as active environmental groups fight against this activity, leading the Faroese government to admit that the fishing might have to be limited in future years.

According to figures from Sea Shepherd, the entity that opposes ‘grinding’, a total of 1,429 white-flanked dolphins (Lagenorhynchus acutus) were captured in just the one night of September 12, by local fishermen, which turned the docks of the small town that serves as the base for the fishing boats into a sea of red blood, as the dead creatures were quartered then loaded onto waiting lorries.

A statement from Sea Shepherd said the group of 1,429 dolphins “was driven for many hours, for around 45 kilometres, with the help of speedboats and jet skis, towards the shallow waters off the beach of Skalabotnur, in the Faroe Islands, where each and every one of the animals was killed”, adding, “It is the largest catch in the history of the Faroe Islands (the previous largest was 1,200 pilot whales in 1940), and it may be the largest single hunt for cetaceans ever recorded in the world”.

The entity also claims that many participants in the hunt lacked the required license to do so, since this permit entails “specific training on how to quickly kill pilot whales and dolphins to avoid unnecessary suffering”, but, in the photos and videos, dolphins are observed still alive on the docks, while many had allegedly been run over by the motorboats, and hit with their propellers, causing them a slow and painful death, as reported by laopiniondemalaga.es.