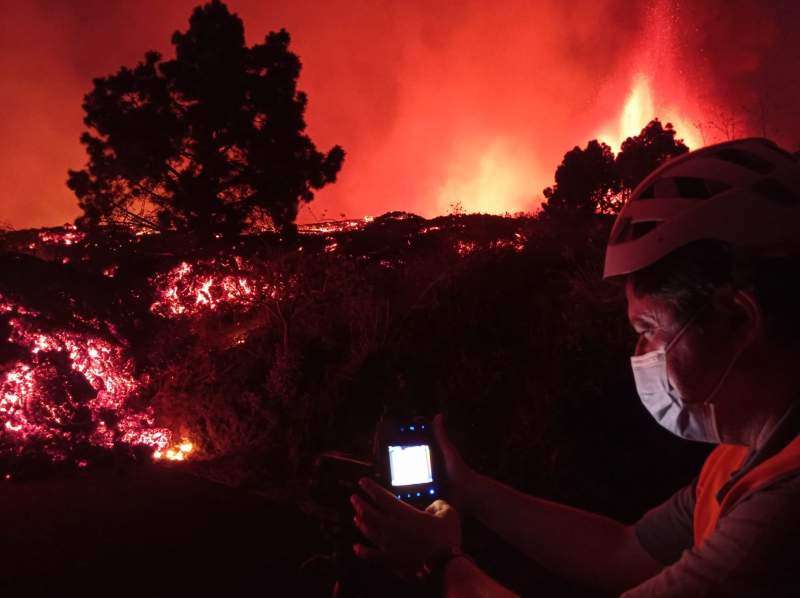 Lava from the Cumbre Vieja volcano destroys several homes in its path.

Lava flowing from the Canary Islands’ first volcanic eruption in 50 years has forced the evacuation of over 5,500 people and now destroyed over 100 houses, authorities said.

The flow of molten rock is expected to reach the coast later today, Monday, September 20, potentially triggering more explosions, and the volcano itself would remain active for days.

The volcano erupted on Sunday, September 19, shooting lava hundreds of metres into the air, engulfing forests and sending molten rock towards the Atlantic Ocean over a sparsely populated area of La Palma, the northwesternmost island in the Canaries archipelago.

No fatalities or injuries have been reported but drone footage captured two tongues of black lava cutting a devastating swathe through the landscape as they advanced down the volcano’s western flank towards the sea.

Witness report seeing the flow of molten rock slowly tear its way through a house in the village of Los Campitos, igniting the interior and sending flames through the windows onto the roof.

Authorities have not given an updated tally of how many properties have been destroyed since the head of La Palma’s local government gave an estimate of 100 early on Monday. Regional leader Angel Victor Torres said the damage would be substantial- potentially costing millions.

“It was horrible, we felt the earthquake, it started in the morning … Then at 3 in the afternoon, the lady from our house came and said you have to pack everything and leave quickly. We’re happy to go home now,” she said at the airport, boarding a flight back home after cutting her trip short,” said Eva, a 53-year old tourist from Austria.

Officials said they were hopeful they would not need to evacuate any more people but warned of the need to treat the volcano with caution.

“It is still active and will continue to be active for the next few days,” regional leader Torres said. The lava flow was likely to reach the coast at about 8 p.m. local time (1900 GMT).

Officials have tonight warned of possible explosions and clouds of toxic gases when the lava reaches the sea.

Regional leader Ángel Víctor Torres said the volcano is expected to be active for the next few days, and the lava flow is predicted to reach the coast at around 20:00 local time (19:00 GMT).

Spain’s Tourism Minister, Reyes Maroto, faced criticism after telling Canal Sur radio that the eruption was an opportunity to attract visitors to the island.

“The island is open. If your hotel is affected, we will find you another one,” she said. “We can make the most of this opportunity. For the many tourists who want to enjoy what nature has brought to La Palma, they can do so in the coming weeks and months.”

The volcano last erupted 50 years ago. It lies in the south of La Palma island, which is home to around 80,000 people. The eruption started around 15:00 local time (14:00 GMT) on Sunday, September 19, and sent lava flowing down the hillside toward villages.