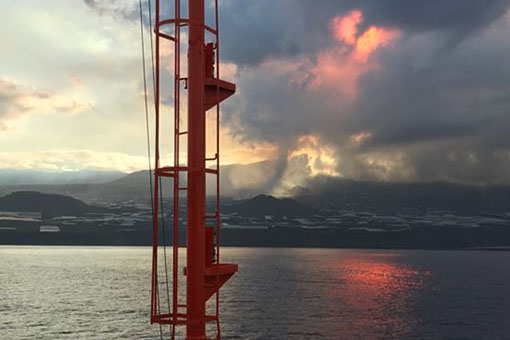 The Spanish Merchant Navy has temporarily prohibited navigation in the areas close to the volcanic eruption in La Palma. Lava flows are expected to reach the coast around 8pm creating acid rain and explosions.

The Maritime Captaincy of Santa Cruz de Tenerife has also ordered the mobilisation of two maritime rescue boats in the area, the Punta Salinas height tug and the Alphard rescue.

“This measure is adopted in a preventive manner, due to the inherent risk for navigation, due to the possible arrival of volcanic flows into the sea,” the government said.

The sailing ban affects a limited area of ​​the western coast of the island, to the south by Punta del Pozo (Puerto Naos, Los Llanos de Aridane) and to the north by Playa de las Viñas (Tazacorte) and parallel to the coast, half a nautical mile from said coastline.

It is recommended that maritime navigation in the affected area be carried out along the meridian 017 ° 57.0 W or to the west of it.

“The prohibition will not affect ships and boats of the public administrations that carry out scientific work, control of the evaluation of the volcanic process, control of maritime traffic, as well as administrative police or maritime rescue. But, in any case, these vessels will maintain a sufficient distance from the arrival area of ​​the washings to the sea, as well as from clouds that the event causes,” the government added.