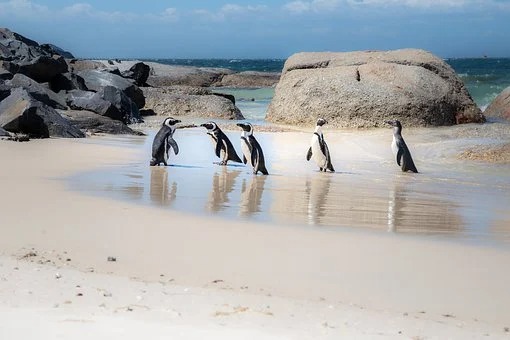 Honey bee swarm kills 63 endangered penguins by stinging them in the eyes.

In a bizarre attack 63 African penguins that are considered endangered were shockingly killed after being stung by bees who even managed to sting them in their eyes. One of the penguins was discovered to have 27 stings from the bees.

The attack is extremely rare but conservationists fear that if repeated the species could head towards extinction. According to the Times, scientists were at first baffled over the mass deaths.

It was soon discovered though that the penguins had been fatally stung by bees. The birds were examined by Vet David Roberts, who after having found the first stings set about checking the other bodies again.

Roberts explained that the stings were “so small that we could easily have missed them all together.

“We then checked the other bodies again and found stings still embedded around the eyes in almost all of the birds.

“We found more than 20 stings in some individuals.”

Speaking to the Mail Online Mr Roberts, of the Southern African Foundation for the Conservation of Coastal Birds commented that: “This is a very rare occurrence.

“We do not expect it to happen often, it’s a fluke. There were also dead bees on the scene.”

The extremely rare attack is not expected to be repeated and the exact cause of the attack is still a mystery. One scientist though believes they may have discovered the possible reason behind it.

“The bees don’t sting unless provoked – we are working on the assumption that a nest or hive in the area was disturbed and caused a mass of bees to flee the nest, swarm and became aggressive.

“Unfortunately the bees encountered a group of penguins on their flight path.”