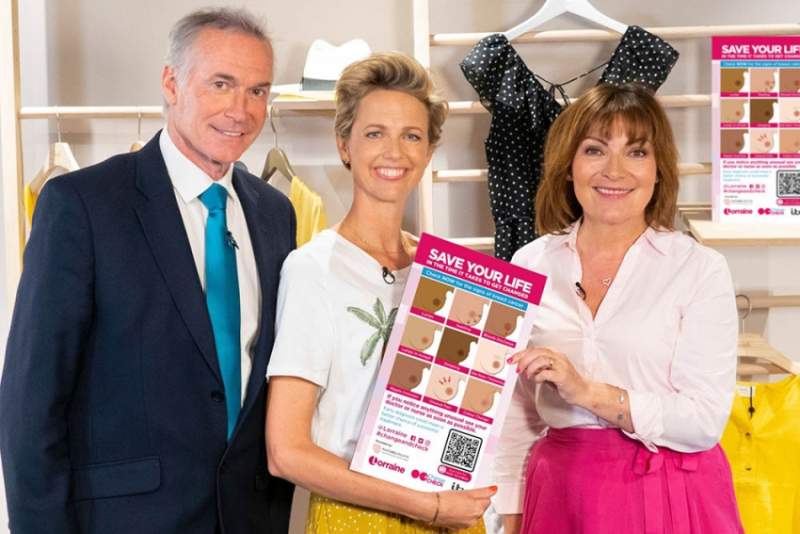 For Breast Cancer Awareness Month, Lorraine Kelly, Lorraine Producer Helen Addis – the campaign’s founder and breast cancer survivor – plus some of the inspiring women they have helped to save will be climbing Britain’s biggest boob, The O2 arena in London.

Joining the ladies on the climb will be none other than Coronation Street actress Sally Dynevor who herself beat breast cancer back in 2009. The climb will take place on Wednesday September 29 and will be broadcast on Lorraine the following day.

Lorraine Kelly  said, “In my 33 years of presenting daytime television, our Change + Check campaign is one of the things I am most proud of and so I’m super excited to be continuing the initiative this year. Climbing Britain’s biggest boob is surely the only way for us to kick start this year’s Breast Cancer Awareness Month on Lorraine.”

Having launched back in 2019, to date the Change + Check campaign has saved 51 womens’ lives – who, having seen the work Lorraine was doing, went on to check their own breasts and thankfully got an early, treatable diagnosis. One of the women sadly had to delay her wedding due to her diagnosis and then Covid, so the show will also be treating her to a makeover before her big day in October.

The Change + Check campaign has gone from strength to strength since launching two years ago. Soon after launch, the initiative was commended by the then Prime Minister, Theresa May. One of the most plauded elements was the stickers encouraging you to check yourself when in changing rooms, which were distributed in stores such as John Lewis and Partners, ASDA, Warehouse and David Lloyd Gyms to name a few. The Metropolitan Police also joined the campaign, placing 10,000 stickers in their sites across London. The initiative has too been endorsed by celebrities such as Emma Bunton, Kelly Osbourne, Naomi Campbell, Sheryl Crow and even Madonna!

In addition, Lorraine’s boob bus toured the UK educating the nation about breast cancer – for both men and women, with Wayne Rooney partnering and urging men to check themselves too.