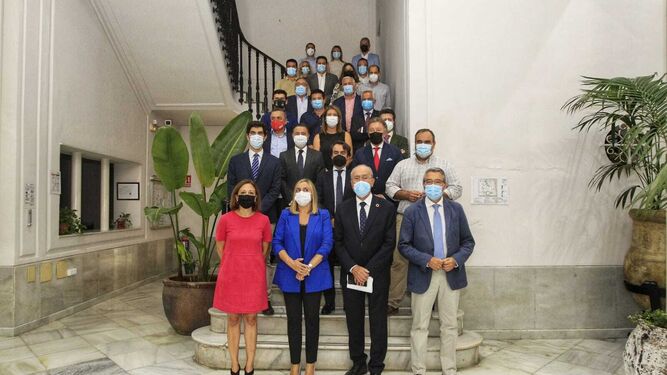 Metropolitan Transport Plan for Málaga announced at a cost of €445 million. image: Twitter

The plan, which remains in the planning phase until October 8, will require financing from European Next Generation funds, (EUNGF), as well as contributions from the State, the Junta de Andalucía, the Diputación de Málaga and the rest of the municipalities who will be directly involved.

This was announced on Monday, September 20, in a presentation by Marifrán Carazo, Minister of Development, Infrastructure and Land Management; Francisco Salado, president of the Malaga Provincial Council and Francisco de la Torre, the Mayor of Malaga.

The initiative seeks to reduce greenhouse gases by 45% within the Malaga metropolitan area. For this, the use of private vehicles would have to be reduced by 4%, which would mean a significant 6.4% reduction in greenhouse gas emissions per year, explained the Plan’s director, Manuel Márquez Pigner.
Furthermore, it forecasts a 25% increase in public transport means and a 5% increase in bicycle use, as well as a 5% decrease in the demand for private vehicles.
Among the three scenarios that were studied for the plan, it was considered that the first of them would be a rapid transit bus between the center of the capital to El Palo, the extension of lines C-1 and C- 2 of Cercanías to Plaza de la Marina or the implementation of a shuttle between the Andalucía Tech metro station and the PTA.
However, this meant ruling out scenario 2, whose main difference was the extension of the metro from Andalucía Tech to the PTA, due to its lower performance between cost and benefit.
This plan included some of the actions that are described in the Malaga Litoral Plan, which was promoted by the mayor. For example, the establishment of a low emissions zone in the city center, the extension of the Cercanías to Plaza de la Marina or the restructuring of the María Zambrano and Muelle Heredia bus stations.
The implementation of the Plan, which would be activated in 2030, is pending the allocation of € 445 million of European Next Generation funds, according to preliminary documentation.