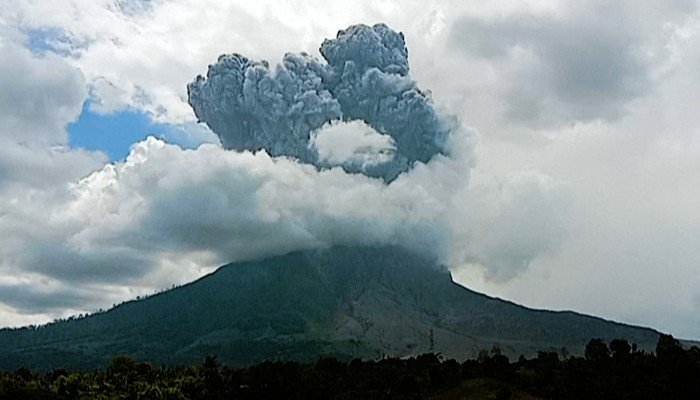 A sulfur cloud from the La Palma volcano is expected to reach the Valencian community on the Spanish mainland this week.
A sulfur cloud being emitted from the La Palma volcano, and helped by northeasterly winds, is expected to reach the Valencian Community on Thursday, September 24. The volcanic eruption on the island of La Palma, in the Canary Islands, continues to flow today, Wednesday, September 22, albeit at a slower but more ‘explosive’ rate as it split into several lava ‘tongues’ overnight.
The first simulations carried out on the trajectory of the ash cloud and sulfur dioxide that the volcano expels indicate that one of the first areas that would be affected by this cloud would be in the south of the Valencian Community.
According to data from the Volcanological Institute of the Canary Islands (Involcan), the nine mouths (exit holes) of the La Palma volcano are expelling some 10,665 tons of sulfur dioxide daily which rises rapidly through the ash column and remains suspended in the intermediate layers of the atmosphere, the direction of which remains at the mercy of the winds.
As of Wednesday morning, September 22, the trade winds are moving in the direction of the southeast, towards the African coast. However, predictions made by the Copernicus program forecast that they will reach the Spanish peninsular coast through the Alboran Sea, reaching the southern Gulf of Valencia by Thursday afternoon.
The simulations indicate that the entire Spanish peninsula will be under the influence of this cloud as of Friday, September 24.
Experts agree that this cloud will not pose a significant health risk. In fact, the volcanic plume – the trace left by the cloud as it moves – contributes to the dispersion of ash and gases over great distances from the center of the eruptive focus.
Ash, together with the rest of the suspended particles, can reach a height that oscillates between 1 and 15 kilometres above sea level.
Please remember to check back for more updates on this story.