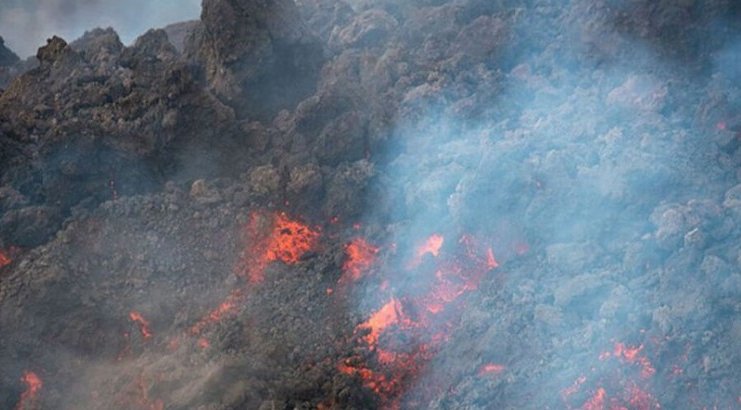 Ever since the Cumbre Vieja volcano erupted on the Canary Island of La Palma last Sunday, September 19,  a tongue of lava has been spreading across country towards the east, destroying everything in its path, with more than 5,000 people already evacuated from their homes, with several hundred homes tragically crushed under the lava flow.

One of the big concerns is what will happen once this lava flow hits the sea, but, according to Eumenio Ancochea, a professor of Petrology at the Complutense University of Madrid, and one of the scientists who is measuring the action of the volcano on the ground, the flow has slowed considerably, “We are measuring the velocity of the stream to get an idea of ​​when it can reach the sea”, he explained.

It is estimated that the lava column is now moving at a speed of four metres per hour, and while stopping short of giving a full prediction, he indicated that “if the eruption stops, the lava will not reach the water”.

Miguel Angel Morcuende, the technical director of the Volcanic Emergency Plan of the Canary Islands, Pevolca, has shown his doubts about the possibility of the lava stream reaching the coast, poi out, “The mathematical prediction we have is that it will continue to advance, but we do not know if it will reach the sea. The eruption is going to last a while – it is anticipated that between 24 and 84 days – and it looks like, if it does, it will reach the sea”.

Mr Ancochea added, “All the historical eruptions on the island of La Palma have reached the sea, so it is normal for it to do so. The orography of the island makes it easy to do so. Either way, the feeling is that it is progressing very slowly, but for a few more hours we will not be able to know how fast it is going to travel”.

If the lava does reach the water, “There will be explosions, but of small importance”, claims Anochea, estimating that they will reach around 30 metres in a radius, when by then “the whole world will be a kilometre away, and ships are being prohibited from reaching the vicinity”, as reported by elespanol.com.