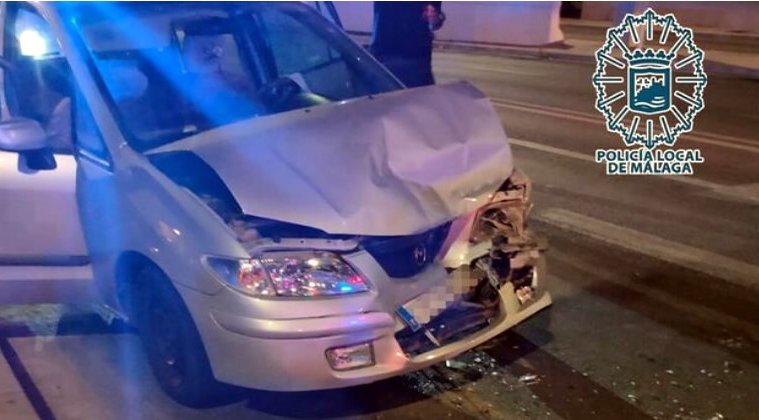 Malaga driver five times over the legal alcohol limit in an accident is under police investigation. image: policia local malaga

Malaga Local Police have read the rights of a 44-year-old Ukrainian driver, resident in Malaga, and placed him under investigation – while not arrested – as the alleged perpetrator of a crime against road safety, for driving a motor vehicle under the influence of alcohol, and causing an accident with injuries.

As reported in a police statement, the events leading up to this occurred at around 10pm on Friday, September 3, on Calle Virgen de la Cabeza in the capital, after Local Police patrols had been immediately mobilised immediately after being informed that a traffic accident had occurred.
On arrival at the scene, officers verified that the accident consisted of a multiple rear-end collision, in which a passenger car had its front smashed into the rear of another car, which in turn, had shunted into a third vehicle that preceded it, the latter two being stopped at the red light of the traffic light located at No23 Avenida Carlos Haya.
Checking the vehicles, officers found that the driver of the first car was uninjured, the second vehicle had considerable damage, with both passengers needing to be taken to hospital, one with suspected whiplash, while an inspection of the third vehicle found the driver was unhurt, though his passenger also needed to be taken to hospital, suffering pain in the cervical and lumbar regions.

It was at this point the officers spotted the obvious signs of the driver being under the influence of alcohol, with slurred speech, alcohol on his breath, and not being able to walk correctly, leading them to ask the man to accompany them to the premises of the Accident and Reported Investigation Group (GIAA) of the Local Police, to be subjected to a breathalyser test, to which he complied voluntarily.

His subsequent breath test showed results of 1.36 and 1.35 milligrams of alcohol per litre of exhaled air in the first and second tests, respectively, while his vehicle was immobilised and taken to the local pound.
The officers determined that based on the configuration of the road, and from the position of the vehicles in the collision, that the accident was most likely the result of the driver’s lack of awareness of the situation on the road in front of him, due to his previous intake of alcohol, as reported by malagahoy.es.