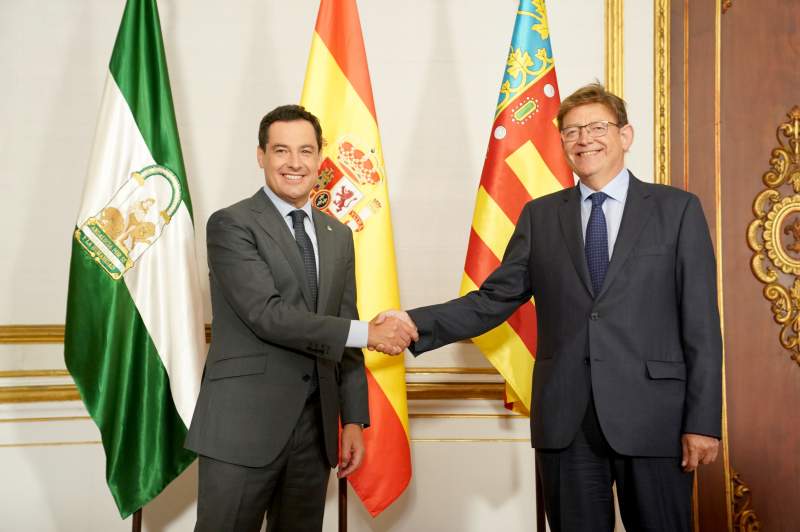 The centre-right Partido Popular (PP) president of Andalucia, Juanma Moreno, and his socialist counterpart in Valencia, Ximo Puig have formed an unlikely political alliance to secure regional financing reform. Both autonomous communities claim they are missing out on billions in funding from the national government.
The current system, Moreno says, is short-changing Andalucia millions every day and has led to a cumulative debt of more than €10 billion.
Puig, a member of PSOE, visited the seat of the Andalucian parliament, the Palacio de San Telmo on September 21 in a move that surprised observers as Spain’s political environment becomes more fraught ahead of regional elections due to be held next year.
Now, their alliance has won the backing of PP leader of the Community of Madrid, Isabel Diaz Ayuso.
At the meeting, Moreno and Puig signed an institutional declaration calling for a new regional financing model, which demands the government distribute funds by population. Such a model though would be dangerous for under-populated areas such as Aragon. However, Puig and Moreno maintain that the current model is deeply unfair to Andalucia and Valencia.
“We receive fewer resources and, therefore, we must allocate our budget almost exclusively to offering a quality public service, health, education and social services, to the detriment of investing in more infrastructure, innovation and technology,” said Moreno.
Their campaign for reform also has the backing of Murcia and Moreno hopes to get the Basque Country and others onside. While Madrid has yet to jump fully onboard, a spokesperson for Diaz Ayuso – a leading contender to replace Pablo Casado, the current leader of the PP – confirmed that she approves of the reform effort.
After a tense meeting in La Moncloa with Prime Minister Pedro Sanchez on June 18, Moreno told reporters, “Andalucia does not want to be ‘above’ anyone, but we will never tolerate being ‘below’ anyone. This is absolutely urgent. We cannot take much longer. We have been looking for money under stones trying to balance the accounts permanently.”
However, the Minister of Finance, Maria Jesus Montero, who was previously the Andalucian regional Minister of Finance, refuted Moreno’s claim and demanded that Moreno use his influence within the PP to seek an agreement on financing reforms within the party.
Any change in the financing system has to be voted on as an organic law in Congress, and the ruling PSOE are reluctant to hold a vote on it if they do not first have guaranteed support from the PP.