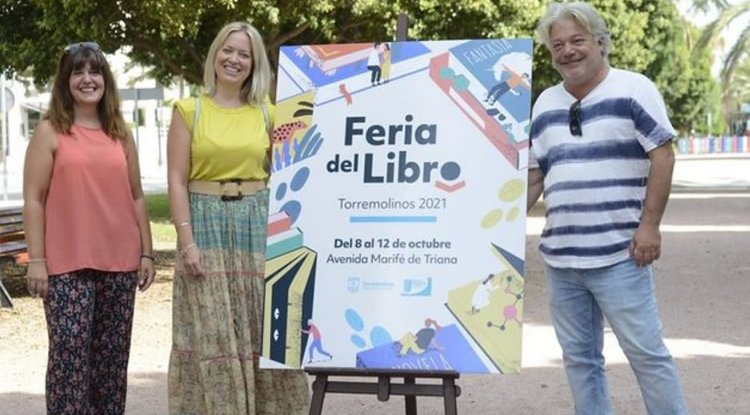 David Tejeiro, the Councillor for Culture from Torremolinos Town Hall, on Thursday, September 23, presented the first-ever Book Fair in the Malaga municipality, which will be held from October 8 to 12, in the Playamar district of Avenida Marife de Triana.

This new cultural event organised by Torremolinos Town Council will be held outdoors and is aimed at all age groups, with the expected participation of a dozen writers, plus the presence of several local book stores.

As Mr Jejeiro explained, “We will have local and national writers, and we will once again bet on taking the event to the neighborhoods, in this case, Playamar, to a quiet area with large spaces, well connected, with many services, and very comfortable for those who want to come and enjoy this fair”.

He added, “We are going to turn Playamar into a great bookstore, and carry out a very complete program of activities to support the cultural industry and facilitate the approach to books to all of Torremolinos”.

Among the authors who are scheduled to appear during this First Torremolinos Book Fair are, Offreds; Isabel Bono, and Miguel Angel Oeste, two of the most renowned Malaga writers of Spanish literature; Juan Naranjo, with his successful autobiographical book edited by Roca; Jose Angel Mañas, with his historical novel ‘¡Pelayo!’;  Ismael Fernandez with his book ‘La Burrita Baldomera’; and Alicia Acosta, and Valeria Kiselova, who will tell some of their stories.

Other invited writers will include, Antena 3 journalist Vicente Valles, who will talk about his two essays – about Trump and about Russian interference in the American elections – and how he is preparing his first adventure in the narrative.

Angelo Nestore, the UMA professor, will also be present, who will perform with the musician Julia Martin, in his need to seek heterodox ways of communicating his prestigious poetry, along with Manuel Hijano, a professor at the University of Malaga, who will present his book about ‘El Caso Almería’, edited by Dreamcatcher, at one of the Fair’s booths, while from the same publisher, there will also be an appearance by Joaquin Recio.

Pedro Ramos, with an already varied literary career, who has played his part in this new project of the Torremolinos Book fair, will present his latest book, and finally, the poet and journalist Pablo Bujalance will pilot a literary workshop.

“When we arrived at the local coalition government, one of our main objectives in the area of ​​Culture was to promote a paradigm shift. Torremolinos needed to recover Culture with capital letters, disciplines, and events of theatre, music, dance, plastic arts, and also literature”, pointed out the councillor, adding that this first Book Fair was born with a vocation of continuity, “because, like other cultural projects that we have launched, we want it to also form part of the brand of our town”, as reported by laopiniondemalaga.es.