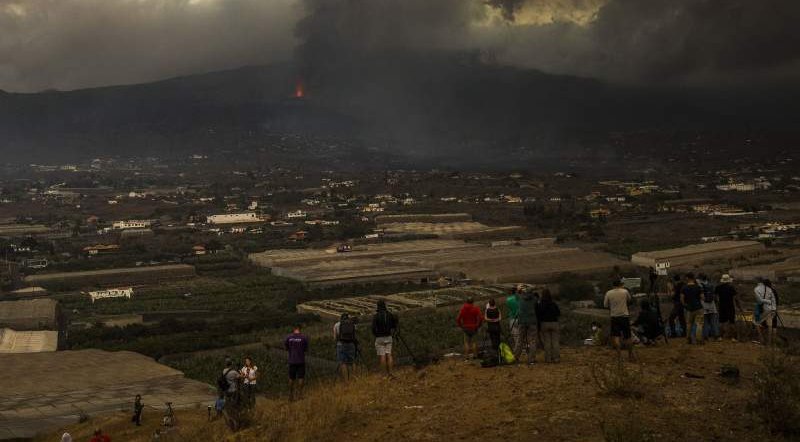 A new volcano lava mouth has emerged on the Spanish island of La Palma causing even more lava flow just as ‘volcano’ tourists begin to arrive.

A new eruptive mouth has opened at the Cumbre Vieja volcano on La Palma, forcing the evacuation of surrounding areas. Volcano tourists’ are causing congestion in La Palma, with plane tickets going for as much as €500 that were obtainable for as little €50 before the disaster.

The Guardia Civil are said to be very unhappy with the number of onlookers and visitors that are flocking to catch a glimpse of the volcanic eruption. ‘Now is not the moment for tourism,’ says a representative of the islands hospitality sector.

The volcanic eruption has seen La Palma put up the “no vacancy” sign. Curious onlookers and journalists have joined the tourists visiting the islands, and the planes and ships arriving are loaded with backpackers carrying camera equipment to capture events.

“Our associates in La Palma have said to us that a lot of tourists are arriving, mostly coming from other islands,” explains Juan Pablo González, the manager of Ashotel, a hospitality association serving the Canary Islands, which are a Spanish archipelago located in the Atlantic Ocean off the northwestern coast of Africa.

“They are coming with the simple aim of seeing the volcano,” he explains. “Now is not the moment for tourism for La Palma, it’s the time to help, and these people are not doing that and are instead occupying beds that could, for example, be used by the security forces.”

The President of the Canary Islands, Angel Victor Torres Perez, said that thankfully there had been no casualties. Despite previous forecasts, the lava is advancing slower than initially anticipated and as of Saturday, September 25, had not yet reached the ocean, said regional emergency officials.

Over 5,500 people have so far been evacuated, and hundreds of houses have been affected, authorities reported.

The eruption and the advancement of the lava flows have caused numerous material damages and many families have lost everything they had. In addition, the gases emitted by the volcano have generated a toxic cloud, which is currently being studied by the Quima Group of Marine Chemistry of the University of La Palma, could also affect the Iberian Peninsula.