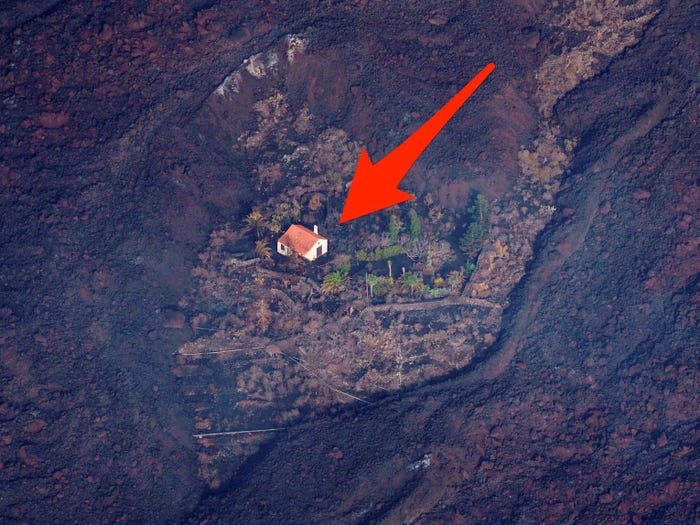 The worlds ‘luckiest house’ has miraculously survived the red-hot lava stream from the La Palma volcano.

THE “world’s luckiest house'” can be seen standing alone amongst the scorched landscape after it miraculously survived the red-hot lava spewing out of the La Palma volcano, despite being directly in the path of the magma.

An unbelievable image shows the home in El Paríso appearing to be perfectly intact as it sits in the midst of devastation. The Danish couple who own the house only discovered it had survived the ravage thanks to the picture that was shared on social media.

The couple said that they are “relieved it’s still standing”, according to Ada Monnikendam, who helped build the house with her husband. “We all started crying like crazy when I told them [the owners] that their beloved house was intact,” she told El Mundo.

Other homeowners were not so lucky, however, as footage showed the slow-moving lava engulfing whole houses, swimming pools, as it crept down the hill of the island on its way to the coast.

The authorities were prepared for the event and had evacuated about 7,000 people from the area- there have so far been no injuries caused by the eruption.

The lava flow first moved down the hill at about 2,300 ft per hour but has slowed to about 13 ft per hour. As it has slowed down, the lava flow presented an ominous sight as it grew taller, reaching heights of up to 50ft in places.