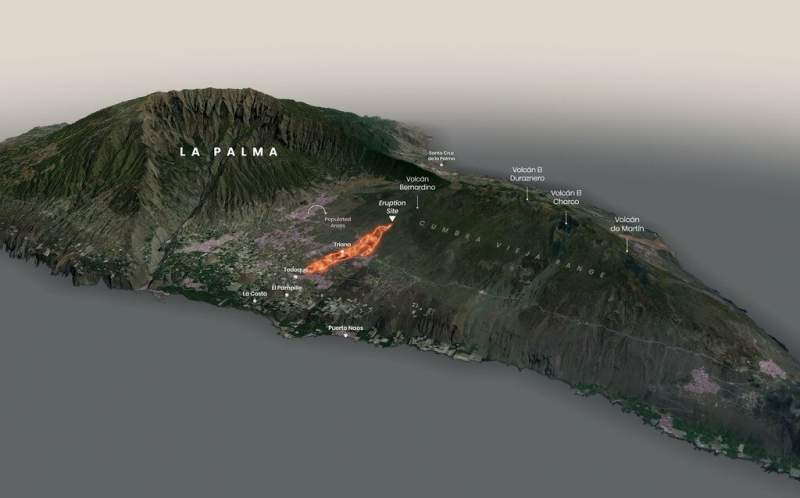 Seismic activity is less, but the lava moves forward.

The Cumbre Vieja volcanic eruption that began Sunday, 19 September, on the island of La Palma in the Canary Islands has been spewing lava relentlessly ever since. The Lava flow, which initially had a flow rate of 700 meters per hour, was expected to reach the Atlantic Ocean Monday evening but the river of lava slowed considerably when it reached flatter terrain.

Experts monitoring the eruption still do not know how long the eruption will last but have theorised it could go on for weeks, or worse, even months. The fissure from which the lava is flowing is just over three miles (5.2 km) from the ocean. With its fairly close proximity to the sea, officials are trying to prepare for what happens then.

The lava flow has split into two separate streams, one heading inland and the other advancing toward the coast, albeit much slower than when the volcanic eruption originally started. The scientific organizations that are monitoring the eruption predict the lava will enter the sea on the coast of Tazacorte, most likely at Playa del Perdido or Playa Nueva.

Once the lava reaches the seawater authorities are concerned about the reaction of the two elements when they come into contact with each other.

According to the emergency management team, there could well be explosions from thermal shock as the lava has a temperature of around 1,800 ºF (1,100ºC) and the seawater just 73ºF (23ºC). The mixture of the molten rock and the seawater will also lead to chemical reactions that will present additional dangers- deadly toxic gases and acid rain.

The thermal shock besides boiling the water will cause the molten rock to shatter into fine grains of volcanic glass that will be carried in the billowing steam clouds. Additionally, the steam clouds will contain hydrochloric acid gas formed by the interaction of lava and saltwater. This gas will have the corrosive effect of diluted battery acid according to the USGS, which can irritate the skin, eyes and respiratory system.

This combination is called “laze” or lava haze and it can be carried back onshore where it should be avoided. “Acid rain can be generated, causing throat and nose irritations to the public,” said José Mangas, professor of Geology at the University of Las Palmas.

The authorities have established a two-mile nautical exclusion zone for boats that runs parallel to the coast from Las Viñas beach in the north to Puerto Naos in the south. Shipping vessels have also been advised to stay well clear of the area considered at risk.

As the lava advances more slowly, the flow has begun to stack up higher towering nearly 40 feet (12 meters) high in places. These walls of molten rock are engulfing everything in their path. When they reach the shore unstable newly formed land along the coast could fall into the sea.

After the lava has superheated the surrounding water, new portions plunging into the sea could send waves of scalding hot water back onto shore. The exact time when the lava will reach the sea, if ever, hasn’t been determined but those monitoring the developing natural disaster are keeping a close eye on the situation.