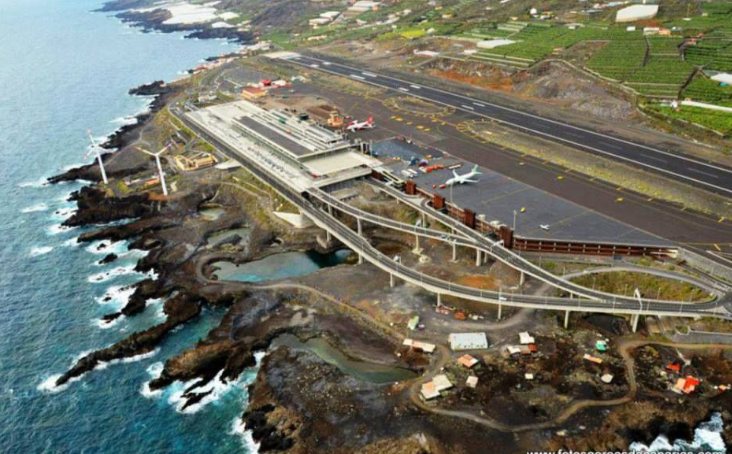 After the cone of the Cumbre Vieja volcano on the island of La Palma broke on Saturday, September 25, opening a new mouth, sending fresh streams of lave spewing down towards the sea, the authorities finally opted to close the island’s airport, located at Camino la Bajita, s/n, 38739, Villa de Mazo, with Spanish airport operator Aena tweeting, “La Palma airport is inoperative due to ash accumulation. Cleaning tasks have started, but the situation may change at any time”.

Airport workers have swept volcanic ash off the runway, but the electronic boards showed cancelled flights, and the departures hall was deserted as some people arriving at the airport discovered they would not be able to fly out.

At the same time, long queues of people can be seen waiting at the port to board boats to take them to safety off this volcanic island paradise, as the explosions grow stronger daily, with many clearly fearing what is possibly yet to come.

The volcano has been erupting since last Sunday, September 19, and has reportedly now, according to the Canary Islands Volcanology Institute, Involcan, entered this new explosive phase, with drones sent by the National Geographical and Mining Institute showing that the volcano’s cone had broken.

Miguel Angel Morcuende, director of the response committee Pevolca, told a news conference on Saturday, “It is not unusual in this type of eruption that the cone of the volcano fractures. A crater is formed that does not support its own weight and the cone breaks. This partial rupture happened overnight”.

Mr Morcuende said that the evacuations currently taking place would be maintained for another 24 hours as a precaution, with thousands of tons of lava already having spewed out, destroying hundreds of houses and forced the evacuation of nearly 6,000 people, on an island with a population of around 83,000, as reported by reuters.com.