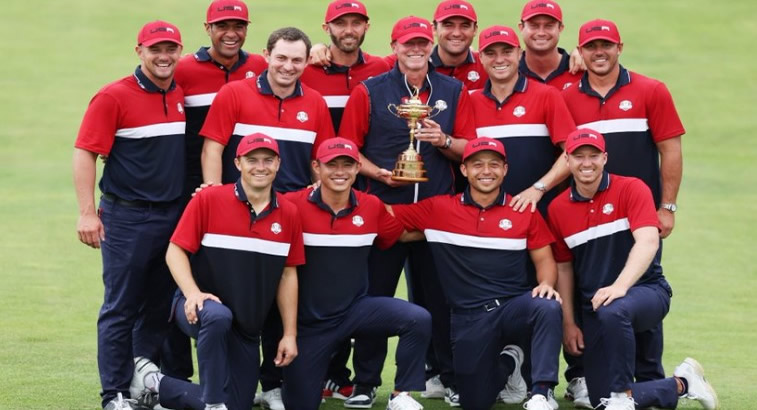 Europe fall to an embarrassing defeat by the US in the Ryder Cup. image: twitter

The Ryder Cup has exchanged hands and is now back in the United States, as their squad totally demolished Europe on the final day, Sunday, September 26, at Whistling Straits in Wisconsin. This record-breaking 19-9 victory went to US captain Steve Stricker, himself a Wisconsinite, saying emotionally, “This is a special day for everyone here involved”.

Adding, “The Ryder Cup means a lot to everybody, your side, and our side. We finally put in a dominant performance. This is a new era right here, they are young, motivated, they came here determined to win. I never won a major. But this is my major”.

Needing 14½ points for a win from the start of play, it was Open champion Collin Morikawa who grabbed the winning half-point after just five of the day’s twelve singles matches, with seven matches still being played, such was the superiority of this US team.

Open champion Collin Morikawa claimed the winning half-point in the fifth of Sunday’s 12 singles matches as the home side raced to the 14½ points they needed, sending the partisan 40,000 strong crowd of golfing fans into a frenzy.

Europe’s only wins were achieved by Ian Poulter, Lee Westwood, and Rory McIlroy, who showed the pent-up emotion of the event when breaking down in tears and apologising to his teammates while being interviewed after the event.

Padraig Harrington, the Europe team manager, obviously deflated, could only offer, “It’s a tough loss, but they were better than us. They were a strong team and played on their best form. They had the momentum the whole time”.

The next Ryder Cup is scheduled to be held in Rome in 2023, as reported by bbc.com.