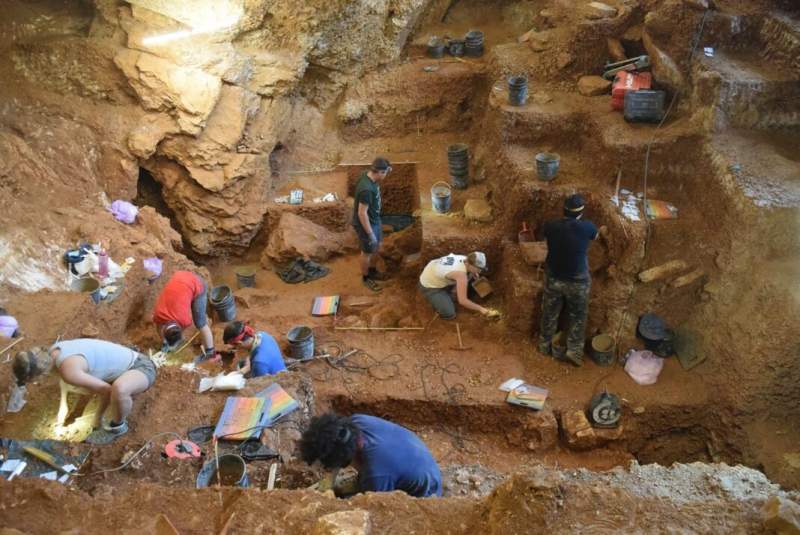 View of the excavation of the early modern human (foreground) and Neanderthal layers (background) in Lapa do Picareiro. Image: Jonathan Haws

Modern humans arrived in Portugal, the westernmost part of Europe, about 5,000 years earlier than previously known.

The discovery of stone tools used by modern humans in Portugal dates to an earlier time period and has put the clock back on humans arriving in Europe.

The tools, discovered in a cave named Lapa do Picareiro, located near the Atlantic coast of central Portugal, link the site with similar finds from across Eurasia to the Russian plain. The tools document the presence of modern humans in westernmost Europe at a time when Neanderthals previously were thought to be present in the region.

“The question whether the last surviving Neanderthals in Europe have been replaced or assimilated by incoming modern humans is a long-standing, unsolved issue in paleo-anthropology,” said Lukas Friedl, an anthropologist at the University of West Bohemia in Pilsen, Czech Republic. “The early dates for Aurignacian stone tools at Picareiro likely rule out the possibility that modern humans arrived into the land long devoid of Neanderthals, and that by itself is exciting.”

Until now, the oldest evidence for modern humans south of the Ebro River in Spain came from Bajondillo, a cave site on the southern coast. The discovery of stone stools characterized as Aurignacian, technology associated with early modern humans in Europe, in a secure stratigraphic context at Picareiro provide definitive evidence of early modern human arrival.

“Bajondillo offered tantalising but controversial evidence that modern humans were in the area earlier than we thought,” Professor Jonathan Haws said. “The evidence in our report definitely supports the Bajondillo implications for an early modern human arrival, but it’s still not clear how they got here. People likely migrated along east-west flowing rivers in the interior, but a coastal route is still possible.”

“The spread of anatomically modern humans across Europe many thousands of years ago is central to our understanding of where we came from as a now-global species,” said John Yellen, program director for archaeology and archaeometry at the National Science Foundation, which supported the work. “This discovery offers significant new evidence that will help shape future research investigating when and where anatomically modern humans arrived in Europe and what interactions they may have had with Neanderthals.”

The Picareiro cave has been under excavation for 25 years and has produced a record of human occupation over the last 50,000 years.

Sahra Talamo of the University of Bologna, Italy, and the Max Planck Institute for Evolutionary Anthropology in Leipzig, Germany, joined the research team to determine the age of the early modern human and Neanderthal occupations. She used state-of-the-art bone pretreatment and accelerator mass spectrometry (AMS) to date the bones that show evidence of butchery cut marks and intentional breakage by humans to extract bone marrow, a highly prized and nutritious food consumed by ancient people. The dating results place the modern human arrival to the interval between 41,000 and 38,000 years ago. The last Neanderthal occupation at the site took place between 45,000 and 42,000 years ago.

“The radiocarbon results from Lapa do Picareiro are not only very precise in terms of the dating method, but also demonstrate the meticulous work of the archeologists at the site,” Talamo said. “The importance of collaboration between the radiocarbon specialist and the archaeologists is essential in order to obtain an accurate chronology like in the case of Picareiro.”

While the dates suggest that modern humans arrived after Neanderthals disappeared, a nearby cave, Oliveira, has evidence for Neanderthals’ survival until 37,000 years ago. The two groups may have overlapped for several thousand years in the area.