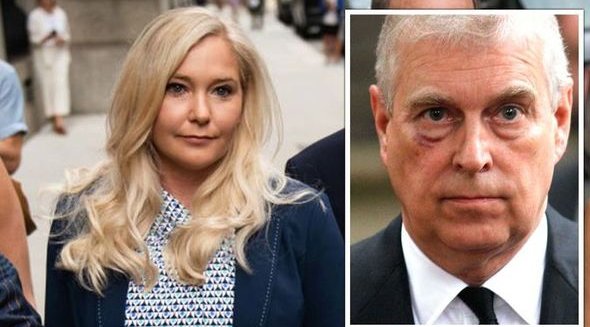 A witness who claims she saw Prince Andrew dancing with sex accuser Virginia Roberts has said she WILL testify in court.

A witness who has come forward and claimed she saw Prince Andrew dancing with his sex accuser Virginia Roberts in Tramps nightclub London in 2001- the night he insisted he was in Pizza Express and has said she ‘will testify in court’.

The witness, Shukri Walker, said she will testify in the upcoming civil case against the Duke of York- counsel for Prince Andrew have the right to review her statement.

Somali-born Ms Walker, a resident of London, is expected to stand by a written statement she gave to an American secret service agent from the FBI, in which she said she vividly remembered apologising to the Queen’s son after standing on his foot on the dancefloor, to which she claims he replied: ‘No problem.’

Walker claims Ms Giuffre – aged 17 at the time – was definitely with Andrew, while the Duke says he has ‘no recollection’ of ever meeting her.

Prince Andrew, 61, is being sued by Ms Giuffre, now 38, in New York over claims he sexually assaulted her on three occasions.

Queen Elizabeth’s second son has repeatedly denied the allegations at the heart of the suit. Giuffre has accused Andrew of forcing her to have sex with him at the London home of Ghislaine Maxwell, a longtime associate of Epstein.

Giuffre also said Andrew abused her at Epstein’s mansion in New York City and on Epstein’s private island in the Caribbean. The case involves what those in the legal world know as private international law — which tries to sort out civil cases that cross borders.

“What we’re talking about are private citizens, whether you’re a prince or regular citizen. It engages different legal systems from different jurisdictions and that’s what makes it complicated,” said Trevor Farrow, a professor at Osgoode Hall Law School at York University in Toronto.