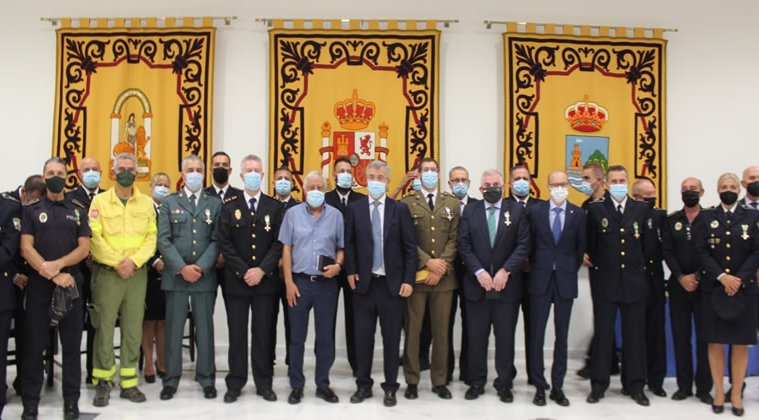 FIREFIGHTER Carlos Martinez Haro, who died while tackling the Sierra Bermaja blaze has been awarded the posthumous Gold Medal for Police Merit

Carlos Martinez Haro, the firefighter from Almeria who died while tackling the recent blaze in Sierra Bermaja, has today, Wednesday, September 29, been awarded the Gold Medal for Police Merit posthumously by the town of Estepona.
Estepona was one of eight municipalities that suffered the devastation from the fire that broke out on September 8, and today, the father of the Almeria firefighter received the medal on behalf of his son from Jose Maria Garcia Urbano, the mayor of Estepona.
In a statement from the town hall, the mayor said, “With the Gold Medal for Police Merit, Estepona wants to show its respect and deep gratitude to this forest firefighter for his dedication and public service”, assuring the town will “always remember him”.
Also awarded the Police Merit Medal with a white badge were members of the Infoca firefighters, who were commended by the mayor for their “enormous effort and for applying all their experience and knowledge preventing this natural disaster from causing greater damage in the affected municipalities”.
The Military Emergency Unit (UME) was also recognised for its “indispensable support and ability to coordinate”, along with the Provincial Firefighters Consortium of Malaga for “safeguarding the integrity and properties of affected neighbours”.
Medals were also given to Captain Alonso Gomez Ocon, the Chief of the Marbella Guardia Civil; Antonio Haro, the commissioner of the National Police Corps; officer Luis Manuel Gomez; and Local Police officers, Jose María Guerrero, Natividad Paz, Jesus Adrian Lanzat, Francisco Javier Vera, and Roberto Doña.
Mr Garcia Urbano thanked, “their dedication and effort to control the flames”, and stressed that they were, “an example of collaboration, dedication, and expertise worthy of recognition and praise”, as reported by laopiniondemalaga.es.