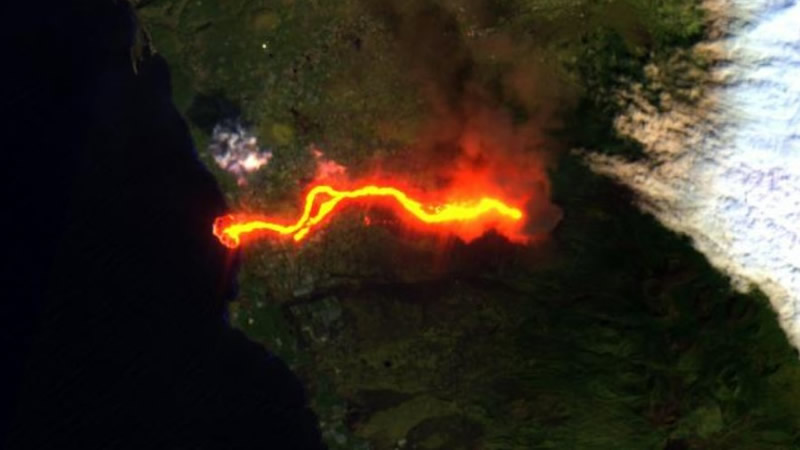 LA PALMA volcano update, as the Government pledges to help all affected residents rebuild their lives

The La Palma volcano has been captured perfectly by the EU’s Copernicus program Sentinel-2 satellite, with images of the moment when the lava stream reached the sea, showing a dramatic aerial view of the river as it empties into the ocean below .

Images highlight the intense orange color of the lava, standing out from a terrain that is being completely destroyed. Sadly, such incredible images, yet t he Cumbre Vieja volcano continues to wreak havoc.

With the volcano in a relative period of stability during the last 24 hours, the steering committee of the Canary Islands Volcanic Emergency Plan (Pevolca) has asked the population closest to the volcano to take extra precautions, amid a more than possible deterioration of the air quality.

Felix Bolaños , the Minister of the Presidency, Relations with the Courts and Democratic Memory, made a guarantee this Thursday, September 30. He assured that the reconstruction of the “life projects of those who have lost everything due to the eruption of the volcano on the island, is one absolute priority for the Government “.

He expressed his “total solidarity with the people who are losing everything, their houses, and their belongings. I am overwhelmed, the reality is truly overwhelming, because it is not taking only houses and buildings, but there are very life projects affected by those lava flows that take everything away “.

In a statement to the media after visiting the facilities of the Forward Command Post, Bolaños wanted to make it clear to the affected residents that the Government of Spain is going to be with them. “The island of La Palma is an absolute priority”, stressing that they are “working against the clock to adopt measures to alleviate what has happened”.

“All the administrations are going to accompany them in this catastrophe. The Government of Spain is working as the Government of the Canary Islands, the Cabildo de La Palma, and their municipalities are doing”, he continued.

Concluding, “We are all doing our best to fight against the volcano, and alleviate its effects as much as possible”, as reported by 20minutos.es .