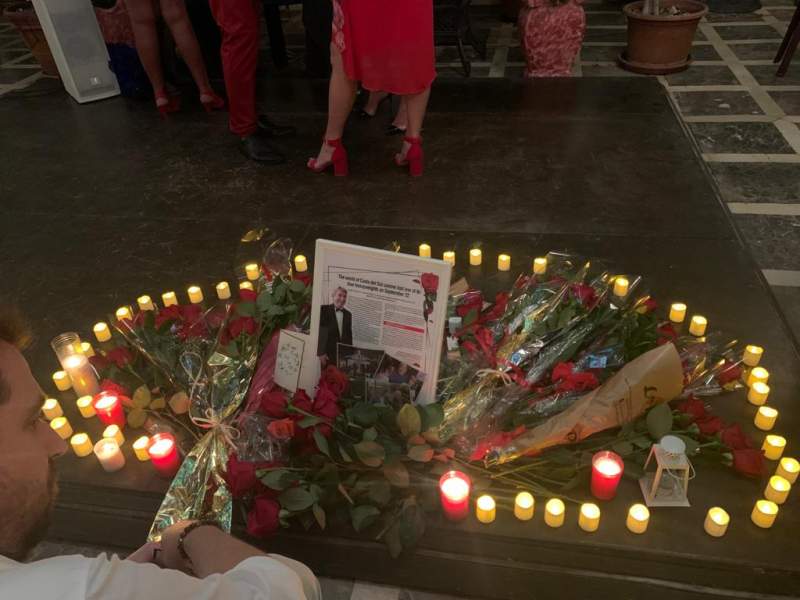 THE Costa del Sol last night paid a fitting tribute to one of the coast’s brightest stars, Valparaiso restaurateur Rafaele Morelli, who died on September 24.

More than 100 of Rafaele’s most loyal clients came out to the restaurant he was famous for, Valparaiso on the Costa del Sol, to say their final goodbye to the legend on Friday, October 1.
Bringing the red roses Morelli was known for giving to each of the women who came to Valparaiso as a touching tribute to him, guests settled in for an evening of live music and drinks all in aid of Cudeca, where Rafaele spent his last two days.
EWN CEO Michel Euesden took to the stage to thank everyone for coming, speaking movingly about Rafaele.
She said: “He was the epitomy of love, the man who became a legend.”
She also urged guests to donate generously to Cudeca, the cancer hospice that looked after Morelli in his final days, praising the charity for the vital work it carries out on the Costa del Sol.
Michel told attendees to “share your memories and take time to remember him.”
Rafaele’s son, Marcello Morelli, also spoke to thank Michel and Steven Euesden for organising the evening.
He said: “Without them we could not have organised this event which was important for me, my brothers and sisters and uncle Vittorio.”
Marcello also thanked Nero Premium Vodka’s Johnny Morrisey for donating to the evening, and encouraged guests to give anything they could to Cudeca.
He said: “They made my father’s life so much easier at the end.”
Marcello’s sister, Paola Morelli, added: “What they did for my father I can’t even explain.
“They should be everywhere in Spain.”
Many of the guests also took the chance to share their memories of Rafaele with the Euro Weekly News.
Jane Hallett told the EWN: “We loved him so much.  He made every woman feel like a queen.”
The Costa del Sol resident added that she had celebrated some of her biggests events at Valparaiso.
She said: “My 70th birthday here was a rave.”
Lynda and James Kayll also spoke movingly about their memories of Morelli, describing how Lynda’s parents had moved to the Costa del Sol in 1969 and had been regulars at Valparaiso.
Lynda told the EWN: “He was the most amazing man and always brought the lady’s a red rose.
“This evening I have brought a rose from me and one from my parents.”
Speaking about the huge numbers of guests who had come out to celebrate Rafaele’s life, Lynda added: “That’s how many people loved him.”
Meanwhile, David Long, president of Age Concern Fuengirola and Mijas, told the Euro Weekly News: “He was one of a kind.”
Guests later shared some of their warmest memories of Rafaele on cards which were attached to balloons before being released by everyone there in an act to commemorate his life.
Later, fireworks also gave Morelli the dazzling send off he deserved.
Supporting Cudeca, the Costa del Sol community once again came together to raise funds for this essential charity.
The Euro Weekly News would like to thank Nero Premium Vodka who donated drinks which were sold for charity and offering to add €1,000 to the funds raised on the evening, as well as acts Duo Zing and Alexandra Avery who gave their time for free.
The EWN would also like to thank Marcello, Stefano, Fabio, Paola, Alessandro, Daniella  and Vittorio Morelli for opening up Valparaiso so that all those who loved Rafaele could share in the evening, as well as to everyone who came out to pay tribute to the Costa del Sol icon and raise money for Cudeca.

Thank you for reading, and don’t forget to check The Euro Weekly News for all your up-to-date local and international news.