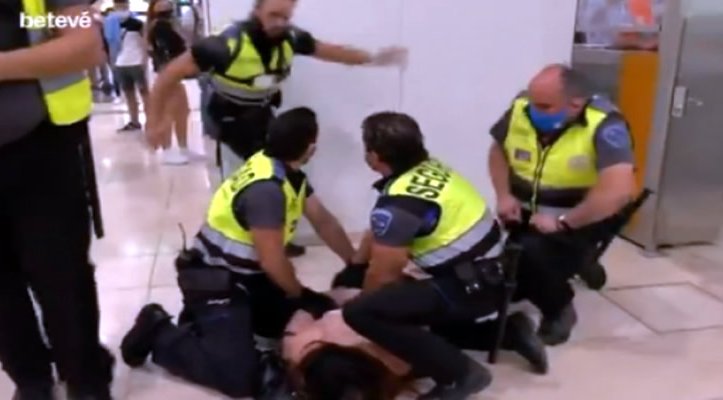 Renfe has reportedly opened an investigation into a controversial incident that took place at the Sants train station in Barcelona today, Friday, October 1. The incident occurred after private security guards from the Sureste company were dealing with a situation involving a woman.

The woman had rebuked a TV camera operator, asking them not to film her, and the guards stepped in to calm the problem. It seems that one of the guards was then injured by an abject, causing four of them to overpower the woman and handcuff her on the floor.

It was while she was on the floor that the guard who had suffered the earlier assault decided to hit her with his hand a few times, and then kicked her.

A spokesman for Renfe, Antonio Carmona, who witnessed the incident first-hand, stated that regardless of the security company firing or not firing the guard, it was definite that he would never work for Renfe again.

Carmona assured that this was an isolated incident, and will not affect their relationship with the security company, while confirming that an investigation would be initiated. He assured that the guard had been instantly dismissed by the company only minutes after the event, and that “the necessary measures will be taken”.

Mossos d’Esquadra have also opened an investigation, with a police source explaining they had already identified all the parties involved, and were waiting to take a statement from the woman, who had been transferred to a hospital by emergency services.

Marc Serra Sole, Barcelona City Council’s Councillor for Citizenship and Participation Rights, and Sants-Montjuic, has demanded an investigation into this “transphobic” assault, lamenting in a tweet later on Friday that, “This transphobic aggression must be investigated. While they are attacking her they say, ‘Shut up, sir’, to vex her”.

He added, “We activate the protocol, and instruct the Non-Discrimination Office to make all legal and psychosocial support available to the assaulted woman”, as reported by 20minutos.es.