The challenge of saving the animals on La Palma 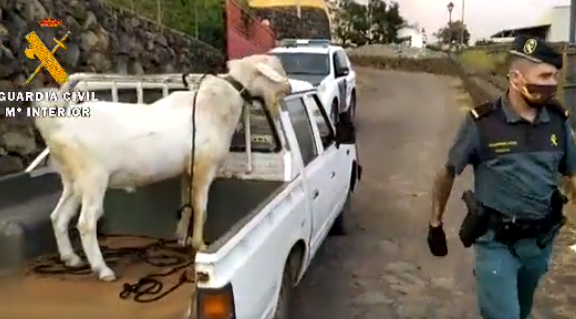 The challenge of saving the animals on La Palma. Image - Screenshot from video

Veterinarians are working on the challenge of saving the animals on La Palma that have been affected by the erupting volcano.

Veterinarians like Elena Tarife are working on the challenge of saving the animals on the island of La Palma. Elena told 20 Minutos that the situation at first “was sad” but that “little by little it has been controlled.”

The veterinarian has been working in a makeshift tent for days, located on the fields of the Eusebio Barreto institute in Los Llanos, one of the areas most affected by the eruption. The Red Cross has set the tent up and the College of Veterinarians has provided the equipment.

Elena said: “We are five veterinarians working every day: Ruth Torres, Anabela Garcia, Evaristo de la Rosa, Cesar Bravo and I. We have more colleagues working hard, and when the situation progresses, we will rotate.”

“We also have a great group of volunteers, thanks to whom this is moving forward,” she adds.

“many animals have arrived, especially dehydrated. This is because either with the noise they fled from the houses or the owners did not have time to catch them.”

“I know of a case where they had six dogs and two ran away, scared.”

She said that many of the animals also have “eyes affected by the ash because they scratch.”

“I have seen mostly companion animals: dogs, cats, ferrets, rabbits, chickens … But there are also many livestock animals affected.”

Two fellow vets from Tarife are evacuating the cattle with the Red Cross and the Guardia Civil.

“They go house to house looking for them. Animals come to us from El Paso, Los Llanos and Tazacorte,” she says.

“In El Paso, there is a collection point for animals, but there is no veterinary point, so they take them down, we see them and they go back up.”

“They are usually animals whose owners have lost their home, have had to be evicted, they don’t have a place to keep them …”

“We are relocating them to shelters of people who have lent themselves to keep the animals at home until the owners find a place to keep them.”

Ricardo Hernandez, owner of the pet shop Siacan in the capital of the island, said that weeks before the eruption, Civil Protection went from “house to house alerting people, asking about the animals.”

“We have worked with about 700 animals with the volcano,” he says.

He is affected by the situation, which is not easy: “I’ve been crying for a couple of days, but I don’t know why,” he confesses.

“People are being very supportive, there are people who even keep several animals.”

Thank you for taking the time to read this article, do remember to come back and check  The Euro Weekly News website for all your up-to-date local and international news stories and remember, you can also follow us on Facebook and Instagram.