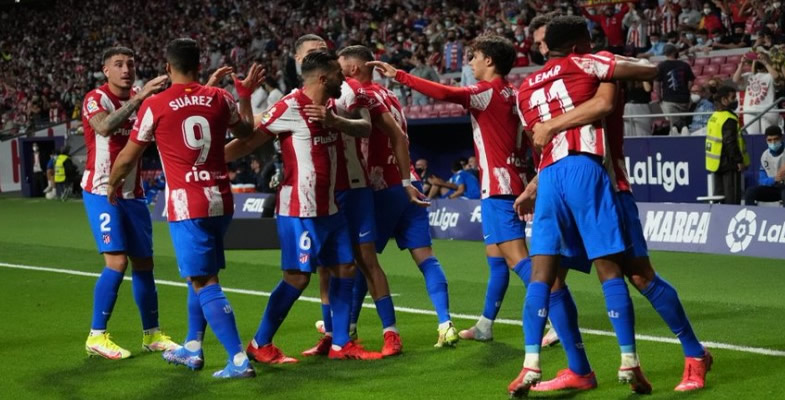 Atletico Madrid really piled the pressure on an already rocky Barcelona side, and their under-fire coach, Ronald Koeman. A one-sided affair at the Wanda Metropolitano on Saturday, October 2, saw the Catalans fall to a 2-0 defeat.

This victory sends Diego Simeone’s LaLiga champions level on points with city rivals Real Madrid, with 17 points from eight matches. Real face Barcelona club, Espanyol, later today, Sunday, October 3. Defeat leaves Barca in ninth, with just 12 points, though they do have a game in hand, but one win in six matches is out of character for this giant of a club.

Thomas Lemar got in behind the Barcelona defence after 24 minutes to smash a stunning goal past Ter Stegen, finishing off a scintillating move of one-touch passing between himself, Luis Suarez and Joao Felix.

Then, of all the people to hurt Barcelona, it was their former hitman, Luis Suarez, apparently deemed to be past his best by Ronald Koeman when he took the hot seat at the Camp Nou. Suarez latched onto a pass from Lemar on 44 minutes and stroked the ball beyond the advancing Barca keeper for 2-0.

“I knew if I was going to score I wasn’t going to celebrate too effusively”, said Suarez after the match, “I have a lot of love for those guys, they were my teammates and they’re going through a tough time”.

A few minutes later, the Uruguayan striker had the chance to make it three, but failed to hit the target. Brazilian, Philippe Coutinho, was given the opportunity to pull his side back into the game, but his poor effort was saved easily by Jan Oblak. Former Barca star Antoine Griezmann made a late appearance as a sub, and almost carved the third goal.

One can only wonder how much longer Ronald Koeman’s misery will last. At one point he could be seen in the stands, holding his head in his hands.