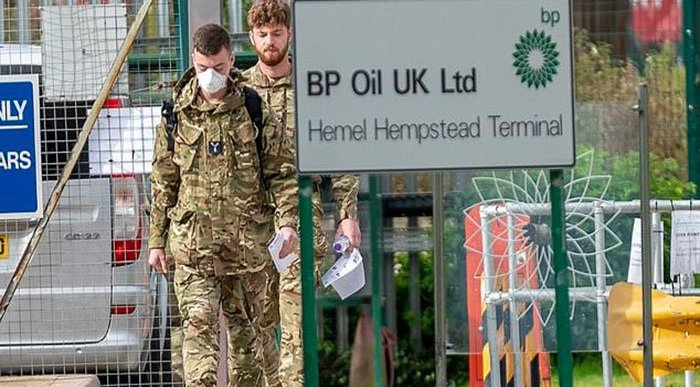 The British Army will start delivering fuel to petrol stations across the UK from today.

British Army tanker drivers are to start delivering fuel to forecourts across the country today, Monday, October 4, the government has confirmed.

Almost 200 military tanker personnel, 100 of which are drivers, will be deployed to provide temporary support as part of the government’s wider action to address the shortage of heavy goods vehicles (HGV), in a bid to relieve pressure on petrol stations.

It follows the end of training for the military personnel at haulier sites across the country to help with the fuel deliveries after a week of panic-buying and drivers hoarding fuel in water bottles after the shortage of truck drivers.

The government is also said to be introducing a bespoke scheme allowing up to 300 fuel tanker drivers to come to the UK immediately but on a temporary basis – until the end of March 2022.

Brian Madderson, chairman of the Petrol Retailers Association, which represents nearly 5,500 of the UK’s 8,300 petrol stations said Scotland, the north of England and parts of the Midlands had seen a “distinct improvement” with fewer dry sites.

But he told BBC Radio 4’s Today programme it remained a “big problem” in London and southeast England, where “if anything it had got worse.”

He said the military drivers will be a “large help” but a “prioritisation of deliveries to filling stations, particularly the independent ones, which are the neighbourhood sites” was needed “immediately”. Mr Madderson also warned that drivers would see a rise in fuel prices next week, but because of “global factors” not because of profiteering.