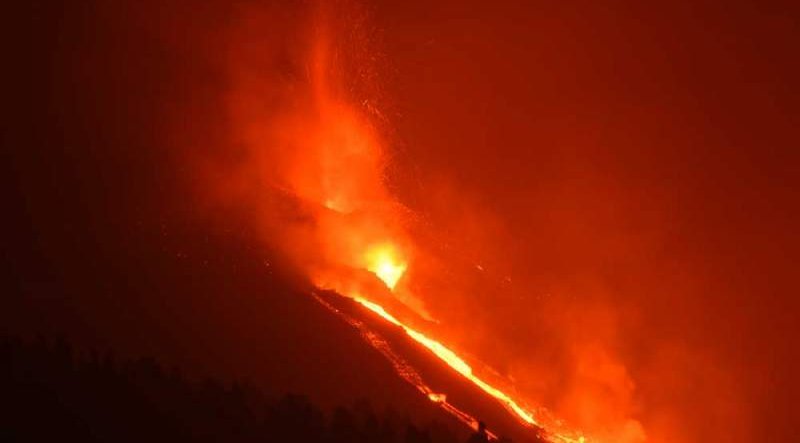 The La Palma lava flow has thickened after a collapse of the volcanic crater took place this morning and red-hot magma streams merged together.

The main cone of the La Palma volcano suffered a partial collapse of its structure at around 9:10 pm on the night of Sunday, October 3. The lava flow today, Monday, October 4, has now thickened greatly, due to some of the eruptive streams fusing together, reported the Volcanological Institute of the Canary Islands.

Despite the heightened activity, the lava appeared to be following a similar trajectory to previous flows and avoiding areas that have so far been spared, Canary Islands’ regional president Angel Victor Torres said.

“We had to order a few lockdowns because of the air quality, but we are not planning to evacuate more people. We’re still in the middle of this…if the lava keeps springing up in the same quantities we saw last night, the damage is going to be greater,”  said Torres in an interview on TVE (Spanish Tv Channel) this morning.

He added that his administration planned to buy around 300 houses to accommodate those who lost their homes and said it was too early to tell how great the total damage would be.

The volcanic eruption in Cumbre Vieja continues its activity 15 days after it began with so much power that scientists can not predict when it will end, while the government is urgently seeking solutions to the problems of housing, infrastructure and irrigation and recovery.

The President of the Government, Pedro Sanchez, announced an aid package, for a total value of over 200 million euros, that it is hoped will serve to guarantee homes, businesses, plantations and infrastructures, as well as to alleviate the problem of water supply on the island and reinstate employment, agriculture and eventually, tourism.