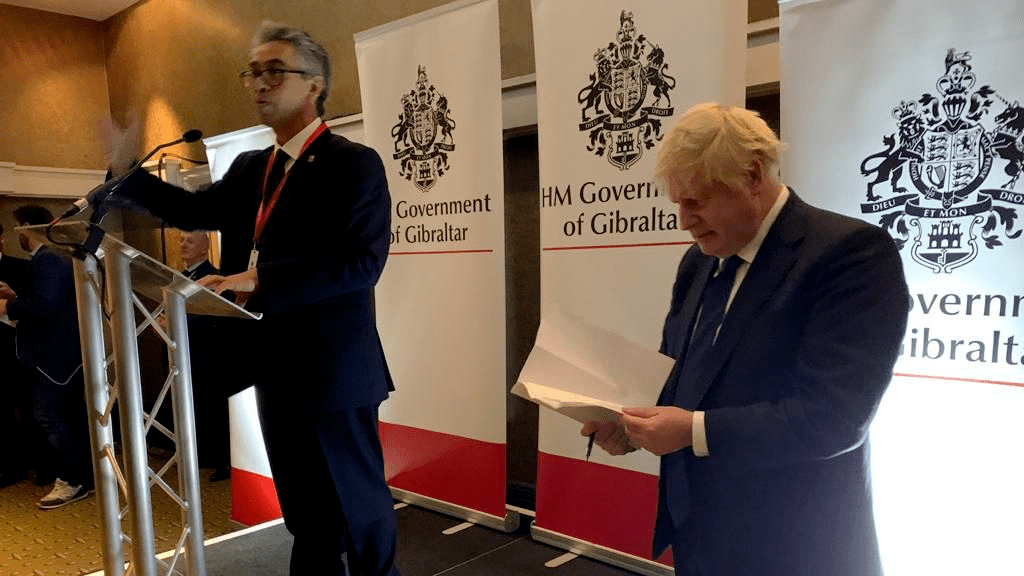 Boris Johnson about to give his speech Credit: Gibraltar Government

Gibraltar was represented at the Conservative Party Conference this year with an information stand and the traditional Gibraltar Reception, addressed by the Prime Minister Boris Johnson.

The Gibraltar Representative to the United Kingdom, Dominique Searle, gave an introductory speech on behalf of the Chief Minister Fabian Picardo, who was unable to attend after testing positive for Covid-19 and needing to self-isolate in Gibraltar.

The Chief Minister sent a personal message of thanks to the Prime Minister for his continued support and for the provision of COVID-19 vaccinations to the Rock.

Mr Searle also reiterated the importance of the historic support of the Royal Air Force, who were recently conferred with the Freedom of the City of Gibraltar.

The Prime Minister, Boris Johnson, said that he was proud that the UK was able to provide vaccines to British Gibraltar and reiterated that the Conservative Party believe in the sovereignty of Gibraltar, the free independent spirit of the Rock, and Gibraltarians’ right to choose their destiny.

He also recognised that Gibraltarians have democratically chosen to be British and confirmed that the UK would stand “rocklike and steadfast” in its support.

The Chief Minister Fabian Picardo, said: “I am extremely sorry that I was unable to attend this year’s Conservative Party Conference.

“The Prime Minister is a long-time and good friend of Gibraltar and I’d like to thank him for his continuous and steadfast support for British Gibraltar. I look forward to attending the party conference season next year.”

Thank you for reading ‘UK Prime Minister Johnson addressed Gibraltar Reception’ and remember that all articles produced by Euro Weekly News may be accessed free of charge.