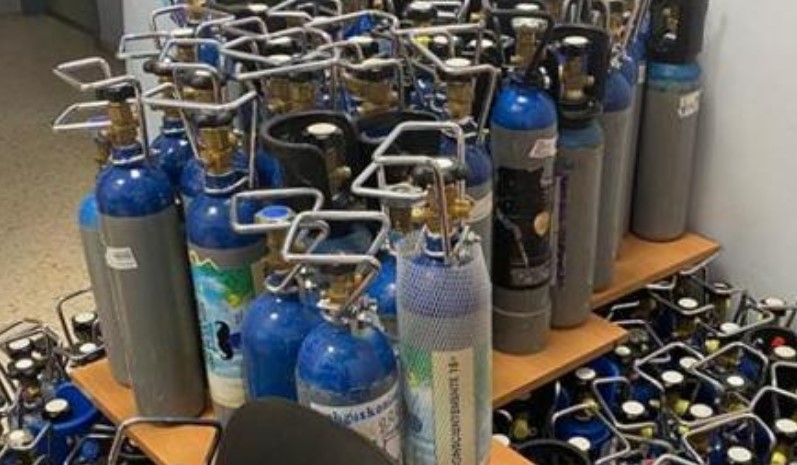 A van containing 250 cylinders of nitrous oxide – better known as ‘laughing gas’ – was intercepted by Local Police officers in the Malaga province city of Marbella recently.

As reported by the police, the incident occurred a few days ago, after their 092 number received a call. The call informed them of an illegal party that was allegedly taking place in a villa on Marbella’s famous Golden Mile.

As a result, police patrols were deployed to the location, and quickly verified that there was indeed a party going on there. They identified the three people who opened the door as being aged between 22 and 31 years, one Spanish national, and two more of foreign origin.
It was at this point that a Dutch plated Mercedes van turned up, totally oblivious to the presence of the police. The driver started hooting the horn in order to be allowed into the grounds of the villa.
When the officers approached the vehicle they encountered two people, who were found to be one Dutch national, and another of Arabic origin. An inspection of the contents of their van uncovered 250 bottles of ‘laughing gas’ (nitrous oxide), for which the two occupants handed over paperwork from a Dutch logistics company in an effort to explain their cargo.
Their cargo of nitrous oxide was confiscated, with the police believing they might have closed down a supply line that has been operating in the area since the onset of the pandemic. Illegal parties have become popular since normal entertainment spots had been closed.
The sale of this gas is totally legal, and it is freely available on the market, or from the internet, even used as an anaesthetic by the dental industry. Unfortunately though, laughing gas has become a regular component of many parties, for the sense of euphoria it can create in anybody who inhales it.
There have been several incidents in the Marbella area over the summer, where this gas is thought by police investigators to have been responsible for one death and two serious injuries. Nitrous oxide stops the full flow of oxygen to the brain, and is known to cause hallucinations or paranoia, and when mixed with cocaine or alcohol the effect increases, and can lead to serious problems, as reported by surinenglish.com.