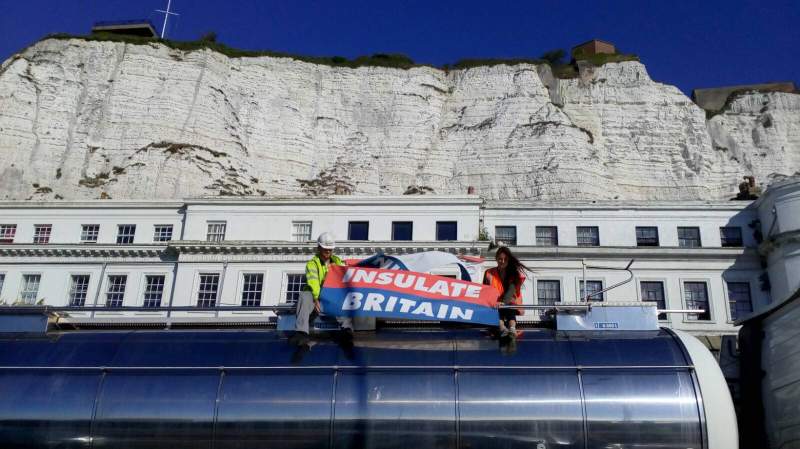 Activist group Insulate Britain apologises for “causing disruption” in London and Dover over the past few weeks.

Activist group Insulate Britain apologises for “causing disruption” in London and Dover over the past few weeks, with a spokesman saying the group “profoundly” apologises after Boris Johnson labelled protesters “irresponsible crusties.”

The Insulate Britain spokesperson Liam Norton spoke outside the Royal Courts today, October 5, saying: “We cannot imagine undertaking such acts in normal circumstances. But we believe that the reality of our situation has to be faced.”

He added: “The collapse of the climate is happening around us. We face economic chaos and the breakdown of law and order in a matter of years.”

“We ask the prime minister to make the statement the country wants to hear – that our government will live up to its responsibilities to protect us, to defend law and order.”

Speaking to LBC earlier, the prime minister said the group are “doing considerable damage to the economy” and are “not” legitimate protesters.

Stanley Johnson, Boris Johnson’s father – who is also an environmental campaigner and international ambassador for the Conservative Environment Network – said that the actions of Insulate Britain are not helping their cause.

The apology comes as Home Secretary Priti Patel is expected to warn protesters who block the motorway could be handed unlimited fines and up to six months in prison during her conference speech today, October 5.

It is also thought that police may be given powers to stop and search activists for “lock-on” equipment that is used to prevent them from being moved from an area.

Insulate Britain has staged sit-down demonstrations on various roads around London – including on the M25, M1 and M4.

On October 2, the government handed them an injunction that banned the group from obstructing traffic and access to motorways and major A roads around the city.

The new powers will be introduced by Priti Patel and also added as an amendment in the Police, Crime, Courts and Sentencing Bill.

The PM’s father said that “Extinction Rebellion and Insulate Britain are making a mistake if they think antagonising ordinary people is going to help the cause.”

“It is not a good idea, it needs to stop – whether it needs to stop by legal means – Kit Malthouse or whatever – I do not know, but I am simply saying as a matter of practical politics those who lead Extinction Rebellion and Insulate Britain need to realise that this is not actually going to advance the cause they are seeking to support.”

Ms Patel said: “The right to protest is a fundamental principle of our democracy but we will not tolerate guerrilla tactics that obstruct people going about their day-to-day business.”

“Whilst the Labour Party stand on the side of these so-called ‘activists’, the Conservative Party will always back the law-abiding, hard-working majority of people in this country.”

The PM added that his government “will give the police the powers they need to stop their reckless and selfish behaviour.”